What are Fidget Spinners: 5 things to know

It’s the gadget of the moment: a top that promises to help fight stress. It’s the Fidget Spinner. Let’s find out what it is and what it is for.

It’s the game of the moment, everyone is crazy about it. It is the Fidget Spinner, an anti-stress game created by an American mother, Catherine Hettingher, in the nineties, but which is only now becoming popular among kids. Let’s find out what it is.

Children on the sand and infections: tips for a risk-free holiday

Congestion risk: 5 tips to prevent it

Focus Pico 107, January issue, is on newsstands! Everything to play

What it is and how it works

It’s a device, a spinning top (usually plastic, but can also be made from other materials) with pads on the ends. To operate it, tighten the central part between the thumb and forefinger and with a blow you start to rotate at full speed on the central pin. It can be made with two blades, three blades or multiple blades. 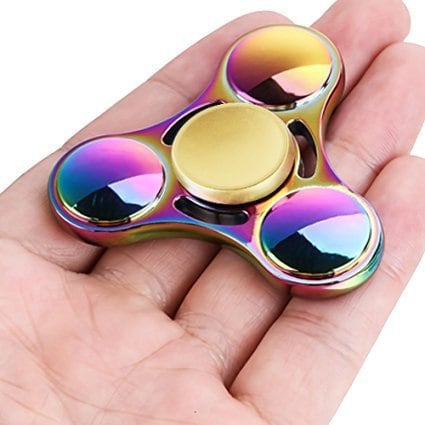 Fidget Spinner: all the hottest models!

For some they are useful anti-stress tools, for others they are just fashion toys. For sure all young people are going crazy for Fidget Spinners, the “tripartite” flat tops …

The idea of ​​the creator was to create an anti-stress object, but he is accused of the opposite. And, especially at school, to distract the kids.

Watch the video to see how it is used.

How much do they cost and what types are there on the market?

They are found everywhere, online, but also in toy stores. Their price may vary depending on the model or material, but on average it ranges from 5 to 15 euros. There are also much more expensive models that can cost hundreds of euros. There is also a version made with the 3D printer.

When was it created?

This top was created in the early 1990s by an American mother, Catherine A. Hettinger, at a time when she was suffering from a neuromuscular disease. He patented it in 1997, but no toy company has ever been interested in the game. Until the patent expired in 2005, as the woman did not have $ 400 needed to renew her license, as she explains to the Guardian. From that moment on, everyone can freely build and produce it. At the time of the boom, Hettinger was therefore unable to benefit from sales. However, the woman has perfected her version of the game, which she will try to finance on the Kickstarter platform.

What does the word “fidget spinner” mean

Fidget means fidgeting all the time and spinner is something that spins. A top that keeps moving.

Since when did he become famous?

The fidget spinner is being talked about in the US especially since this spring. Kids and children are crazy about it: along with fashion has also come the concern of teachers and education experts because they would be a major source of distraction for students. Some schools have banned them.

Christmas: who decorates the house in November is happier – Holidays

17 botanical gardens among the most beautiful in Italy

17 botanical gardens among the most beautiful in Italy

Children on the sand and infections: tips for a risk-free holiday

What are Fidget Spinners: 5 things to know