Bites of marine animals and children: how to intervene? Not only weevers, but also hedgehogs, scorpion fish, rays and coral. Let’s see which remedies to use to relieve the pain.

Not just jellyfish. Although they are the most frequent, jellyfish are not the only dangerous animals that can be encountered during a beach holiday.

Other organisms can make a child – but also an adult – have a bad day: weevers, for example, or other fish with poisonous spines. Or, again, sea urchins, corals and anenomes: however beautiful they may be to observe underwater, touching them, with your hands or feet, could cause some discomfort.

In all these cases, puncture or contact usually causes strong local symptoms: intense pain – so to speak, in some cases it can be stronger than that of a wasp sting – local swelling and redness.

As in the case of contact with a jellyfish, the transmitted venom could cause, in sensitive people, a mild to intense allergic reaction, with the risk of anaphylactic shock. Unlike what happens with the jellyfish, however, close encounters with these organisms also lead to more or less punctate wounds, which could be vehicle of infections. Let’s see what it is exactly and how to intervene. 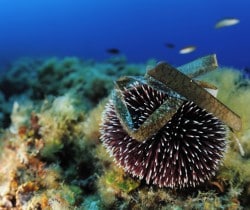 In the Mediterranean there are no particularly dangerous animals, such as some jellyfish present in Australian waters whose contact is even lethal. However, a meeting with us too …

Where are they, what do they cause

There weever is a small fish that lives on sandy bottoms, where it is quite difficult to see. It can also be found on the water’s edge. Unfortunately for us, on the dorsal fin there are spines which, once penetrated into the skin, release a toxin that causes a very severe pain – stronger than that of a wasp sting. The sting can happen by accidentally placing a foot or hand on a weever camouflaged in the sand.

Warning: poisonous fish such as weever and scorpionfish remain so even for a few hours after death. Any dead specimens on the shore should never be touched.

Besides the pain, what happens is that the poison injection site becomes red and swollen. As reported by the information page on the website of the Bambino Gesù Children’s Hospital in Rome, “sometimes tingling and loss of sensitivity in the part affected by the sting, nausea, vomiting and fever may also appear”.

The pain can last several hours and extend from the point of contact to the entire limb (usually the legs). After the intense pain, the area can remain particularly sensitive even for several days.

Similar symptoms are those that occur following a prick by a thorn redfish, a fish that prefers harder and more rocky areas.

In case of a sting by weever or other stinging fish such as redfish, the first thing to do is check if there are any thorns stuck in the skin. In this case, you can try to pull them out with tweezers. If you don’t succeed, however, it is better to leave it alone and refer the matter to the doctor, because you risk making the situation worse.

The second step is washing the wound, with sea water, or sweet water or with a disinfectant solution.

To alleviate pain, the strategy that the scientific literature deems most useful is immersion in hot water of the affected area. “As in the case of contact with jellyfish, the water must be as hot as possible, but obviously always tolerable” underlines the toxicologist Marco Marano, head of the Poison Control Center of the Bambino Gesù Children’s Hospital in Rome.

The wound, however small, represents an open window on the surrounding world and can therefore be a vehicle for infections: for example tetanus, which should however be avoided if the child has performed the vaccinations provided for by the vaccination schedule. For this, it is necessary keep the wound under control for the following hours and days, to check for signs of inflammation and infection (further swelling and redness, fever, etc.). In this case, the doctor will evaluate a therapy with cortisone and antibiotics.

More controversial is the use of antibiotics for preventive purposes, to avoid the risk of infections: some offer it, others do not.

In a small number of cases, the venom inoculated with the sting can give rise to one allergic-type reaction: “If the child has symptoms that may suggest an allergic reaction – swelling in areas other than the affected one, difficulty in breathing, paleness, intense sweating – it is necessary call 118 to understand how to behave or take him directly to the emergency room“underlines Marano.

The meeting with a race is less frequent: it may however happen to get too close to one of these animals, or to accidentally “step on” it, if it is on the backdrop. In this case, the breed could sting the victim with some thorns present on the tail: generally the stings affect the ankles or legs.

The symptoms are not very different from those of a sting from a poisonous fish: intense pain which peaks 30 to 90 minutes after the event and can persist for a couple of days. In addition, local swelling and redness. In sensitive individuals, an allergic reaction can occur, ranging from mild to severe, up to anaphylactic shock.

The remedies are also similar to those for weever and scorpion fish;

While sand can hide weeds, rocks also have their little dangers: sea urchins. Also in this case the problem is the thorns, which can generally stick to the hands and feet.

The pain is usually bothersome or very annoying, but not dramatically intense: the greatest risk is that some fragments remain in the skin, where it can cause infection.

how to start on the right foot?

how to start on the right foot?