We asked one of our family reporters from Milan, Marzia, Fabio and little Aris, aged 3, to take a trip to the Egyptian Museum in Turin 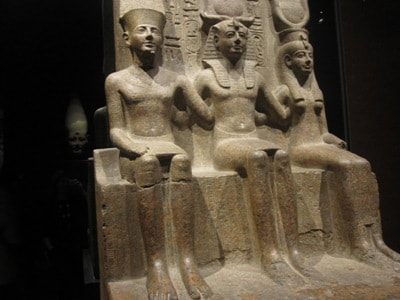 We asked one of our family reporters from Milan, Marzia, Fabio and little Aris, aged 3, to take a trip to the Egyptian Museum in Turin

Milan-Turin in one day, without stress

Swings for children: which ones to choose

In recent months, little Aris has shown an ever stronger curiosity for history (which I am very happy to explain with the help of books and excursions) and its mysteries. In first place, dinosaurs and homo sapiens sapiens (‘Mom, why then do the anthopomorphic monkeys lose their hair? ‘), closely followed by mummies and pyramids (‘the sarcophagi are the boxes all decorated for the dead who are there‘)

Let’s think, then, of going on a trip to the Egyptian Museum in Turin, founded in 1824 and considered the most important in the world after the one in Cairo.

We have already been several times to the much smaller one in Milan, which is inside the Castello Sforzesco, and Aris declares he wants to see new ‘ancient Egyptian things’.

The Milan-Turin motorway is often not very busy during the weekend (we got into the car on Saturday, mid-morning). In about two hours, standard time for the journey, we arrived and the baby even took a nap … In short, it is not a walk, but it is doable with the baby (4 hours round trip), provided you calculate a little about its rhythms.

A possible and annoying problem, however, in Turin (as in every city), is to park and avoid wandering around for hours.

The large museum is located in the historic center, in via dell’Accademia delle Scienze (between the very central Piazza San Carlo and Piazza Castello): quickly finding a place for your car here is a mirage. A good solution is to leave the car in the Valdo Fusi covered parking (Piazzale Valdo Fusi), in an excellent position to get around on foot. Among other things, the hourly rate (€ 1.50 per hour) is cheaper than the ‘blue stripes’ in the center (€ 2.50 per hour).

A ‘greedy’ break in the square

In the end, as usual, we did it so calmly that it is already time for lunch … While we are walking towards the Museum, we decide to take a break to refresh ourselves. 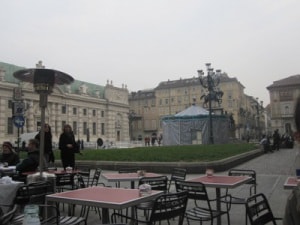 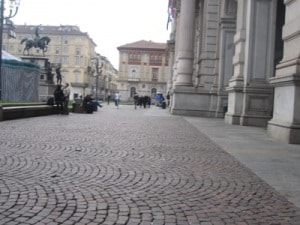 We head towards the grandiose Piazza Carlo Alberto, where in the center dominates the equestrian monument of the king of Sardinia (Carlo Alberto di Savoia, in fact) from which it takes its name.

Almost entirely pedestrianized, with green flower beds and benches, it is a good point for a stop with the children and is very reminiscent of the Central European atmosphere, a bit typical of the ‘old’ heart of the city.

Here is a photo of the square taken by Aris 🙂 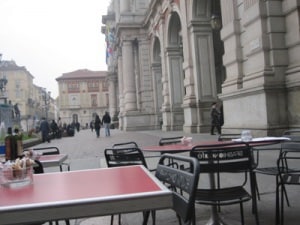 Here overlook the National University Library of Turin (its foundation dates back to 1723, the current site, however, was built between 1957 and 1973) and the Museum of the Italian Risorgimento, inside Palazzo Carignano (in Piedmontese , as my ‘native guide’ tells me: Palas Carignan), an excellent example of Baroque architecture.

On the south side, there is the eighteenth-century Palazzo Campana, current seat of the university department of Mathematics (from 1929 to the fall of the regime, it was the seat of the provincial federation of the National Fascist Party).

We can continue to admire the whole of Piazza Carlo Alberto sitting in the dehors (open all year) of the Sfashion Cafè. This is the colorful and ironic place of Piero Chiambretti that offers Neapolitan cuisine and pizza certified by the Vera Pizza Napoletana Association (the requirements to be part of it are very strict). 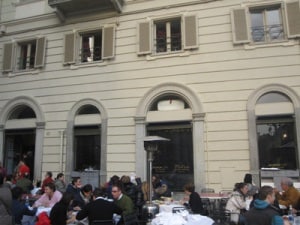 In Milan (and in Lombardy) there is no certified place for this pizza … Already a good reason for me as a true pizza fan (and Naples is far away!) To come to Turin!

Finally, no ‘nasty surprises’ on the price side: it starts at € 5 for the Margherita and then there are even the Baby Pizza, between € 3.50 and € 4.50. In short, also perfect for children!

A complete visit also on ‘4 wheels’

We set off satisfied and in less than 15 minutes, we reach the famous Museum that …

How to go from breastfeeding to the first meals

How to go from breastfeeding to the first meals