The 44 most beautiful amusement parks in Italy

Do you want the outdoors and a different day? From north to south, along the whole boot, nostrofiglio.it has selected the most interesting amusement parks where to take children of all ages. Roller coasters, dinosaurs, wild animals, dolphins: there is something for everyone

Children love the amusement parks. What are we waiting for to go there?

Starting from Valle d’Aosta with the Mont Blanc Adventure Park, up to Sardinia with Diverland, we have selected the more beautiful amusement parks for children of our peninsula.

Not only the most loved, such as Gardaland, Leolandia, the Aquarium of Genoa, Etnaland and Cinecittà World, but also the lesser known ones.

Discover them all with us!

PLEASE NOTE: before going to one of these parks, check the openings and closings and the times.

On the same topic also: 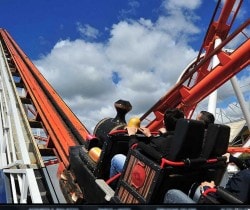 The 39 most beautiful amusement parks in Italy

From north to south, along the whole boot, nostrofiglio.it has selected the most interesting amusement parks where to take children of all ages. Roller coasters, dinosaurs, animals …

Adventure park suitable for all ages. A path of bridges and elevated pulleys winds through the trees in an alpine forest.

Wildlife park immersed in a wood where it is possible to meet the typical animals of the Alps such as the ibex, the chamois, the marmot, various species of birds of prey, roe deer, wild boars, common and variable hares, deer and a multicolored alpine flora. There is also a play area and a picnic area.

Water park with 4-lane Olympic-size swimming pool, whirlpools and water attractions such as: the Aqua-tube, the 65-meter toboggan, the 4-lane Sliding Hills slide and for the little ones the Kid Castle.

It is a biopark, that is, the animals live in semi-freedom in their faithfully reconstructed habitats. Among the environments to visit: the Madagascar area, the penguin bay, the Serengeti where there are the animals of the African savannah, the baobab farm, the raptors of Petra and the Sumatra area where you can see the tigers.

Safari park divided into two large areas, the wildlife area and the one dedicated to the typical attractions of amusement parks. In the first area it is possible to go on a safari of about an hour and a half in your own car or on the train provided by the park, during which it is possible to admire and photograph the animals. The second area of ​​the park is characterized by numerous attractions, among which: the pirate ship and the water path on logs.

It is the largest amusement park in Lombardy. Initially born as Minitalia, that is the miniature reconstruction of the architectural beauties of Italy. Then over the years several attractions and thematic areas have been joined, including Cowboy Town: in a spaghetti western scenario there are the most popular rides such as the floating logs of the Gold River, the flight of the vultures, the crazy track of the Mine Train, and for the little ones the Tren8. Another very popular thematic area is that of the pirates with the Galleon rising and falling at a breathtaking pace.

On Saturday 16 March 2019, Leolandia opened the season of Italian amusement parks and inaugurated its own with the novelty The Circus of the Forest, the exclusive show of the friendly Masha and the Bear, which multiplies the experience of Forest of Masha and the Bear, the first and only themed area dedicated to them. The characters from the globally successful animated series are also returning Miraculous ™, the stories of Ladybug and Chat Noir that will enchant children and their families with their adventures.

There are also loved ones PJ Masks – Superpjamas Gattoboy, Gufetta and Geco.There is no shortage of shows, including Fairytale: the Leolandia musical. And again, two new shows with pirates and cowboys, The Kingdom of Kamau is The Secret of Cowboy Town. New in the summer is the beach-style area The Bay of the Little Surfers, with a dry and wet playing space.