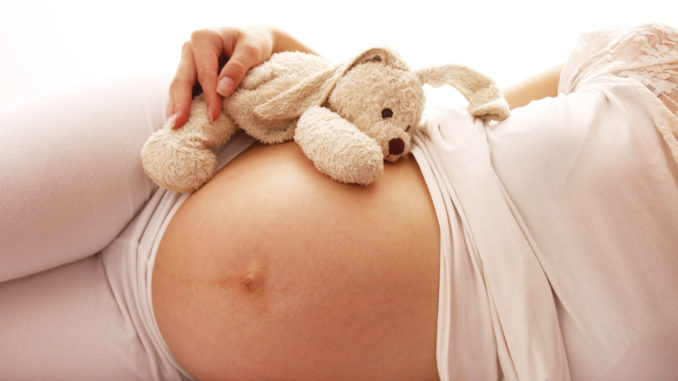 During pregnancy, hormonal changes trigger a number of changes in the body. This includes morning sickness as well as cravings, mood swings, weight gain and also increased vaginal discharge. If the increase in discharge during pregnancy is quite normal, it can also be a sign of an infection that should be treated with medication by the doctor.

What is vaginal discharge?

Every woman knows vaginal discharge (also known as fluorine vaginalis). It consists of uterine mucus and mucous membrane cells of the vagina and is the body’s protective shield against pathogens. Since it contains a lot of lactic acid bacteria, it creates an acidic vaginal environment in which viruses and bacteria can only multiply with difficulty. The amount of discharge varies from woman to woman. In addition, the strength varies over the course of the cycle. Due to the different levels of secretion of the hormone estrogen, the discharge increases with each ovulation and before the period. But other factors, such as stress and sexual arousal, also have an influence. Usually the discharge is clear or white and odorless.

Can increased discharge be the first sign of pregnancy?

Even before the missed period, there are some indications that fertilization has taken place. Food cravings, nausea, circulatory problems, tiredness, or chest pulling can all be signs of early pregnancy. This also includes increased discharge. However, this does not mean that if you have a large amount of discharge, you must be pregnant. The only way to be certain is through a pregnancy test or a visit to the doctor.

Is Heavy Discharge Normal During Pregnancy?

Due to the hormonal change, the vaginal area is more relaxed and better supplied with blood. It also increases the amount of discharge. In this way, the body cleanses the uterus and vagina of any pathogens that may be present in order to protect the new life. As long as the discharge is clear to white and odorless, this is completely normal. It even suggests a very well functioning immune system doing its job to prevent infection. You have to accept the stronger discharge as a side effect of pregnancy and possibly absorb larger amounts with a panty liner.

However, if the vaginal flour changes color and smells bad, an infection is likely. If the discharge changes color, it is a sign that the natural vaginal flora is disturbed. Since infections can harm the baby in the worst case, you should definitely see your gynecologist if:

If the discharge turns yellow, it could be caused by vaginal inflammation. This can be caused by bacteria, chlamydia, fungi or viruses. The yellow color indicates an increased number of white blood cells the body is producing to fight the inflammation. Other symptoms include pain when urinating, redness, swelling, and an unpleasant fish-like odor from the discharge. The ph value in the vagina rises to over 4.5. However, yellow discharge, which is a sign of impaired vaginal flora, can also be caused by other factors. The use of medication can throw the vaginal environment out of balance as well as hormonal fluctuations, a weakened immune system or too much intimate hygiene. However, especially during pregnancy, if you have a yellow discharge, you should have your doctor clarify whether there is an infection before it can harm the baby.

If the discharge has a brown discoloration at the beginning of the pregnancy, this can also have a harmless cause. Between the seventh and twelfth day after the egg cell has been fertilized, it nests in the lining of the uterus. This can lead to slight implantation bleeding, the so-called nidation bleeding, which about every fifth woman experiences. They are brownish and go away again after three days.

However, if the brown discharge occurs at a later stage of pregnancy and is associated with other symptoms such as itching or pain, you should definitely see a gynecologist. It is then not a bleeding, but a sign that the environment in the vagina does not correspond to its normal state. The colors can vary from a light brown to a reddish brown color to a dark brown, sometimes with a crumbly consistency or a slight admixture of blood.

The causes are infections caused by bacteria, fungi or viruses. If the color is dark brown, for example, the human papillomavirus (HPV), which leads to cervical cancer, may be responsible. If itching, swelling, painful urination and sexual intercourse, or an unpleasant odor in the discharge, a fungal infection is likely. It is true that drugs against vaginal thrush are now available in pharmacies without a prescription. During pregnancy, if you have these symptoms, you should still consult a gynecologist to be on the safe side in order to rule out other diseases that could be harmful to your baby.

Greenish discharge usually indicates a sexually transmitted disease. If your vaginal flour turns green, you should see a doctor immediately. The causative disease can spread to the urethra or internal genital organs, cause infertility and become dangerous to your baby. Other symptoms can include itching, pain when urinating or having sexual intercourse, and a fishy odor. The discharge can become thick, frothy, or crumbly.

One possible cause is the sexually transmitted disease gonorrhea (also known as gonorrhea), which is caused by gonococci. These and other bacteria that cause bacterial vaginosis with greenish discharge must be treated with antibiotics. This can be done as an oral tablet or in the form of vaginal creams or tablets. In the case of a more harmless fungal infection, an over-the-counter drug from the pharmacy is sufficient. In order to be sure what type of infection is present, however, the way to the gynecologist is essential. If you have become infected with a sexually transmitted disease, it is imperative that you also have your partner examined in order to avoid mutual re-infection.

If bleeding occurs during pregnancy, it is always advisable to see a doctor. If the bleeding is brown in color in early pregnancy, it may be an implantation bleeding (see brownish discharge), which is completely harmless. Pregnancy increases the blood supply to the vagina, which is why there may be harmless spotting during sexual intercourse.

However, bloody discharge can also indicate bruises in the uterus, and in combination with pain, an ectopic pregnancy or even a miscarriage. Therefore, especially if you have severe bright red bleeding, you should immediately consult a doctor or the clinic. An ectopic pregnancy occurs when the fertilized egg has implanted outside the uterus in the area of ​​the fallopian tubes. This can lead to serious complications, such as rupture of the fallopian tube wall, and must be treated with miscarriage scraping.

How can you prevent vaginal infections during pregnancy?

Due to the hormonal changes during pregnancy, the vaginal flora is particularly at risk of being unbalanced. Bacteria, viruses and fungi can then multiply and spread more easily. In order to prevent infections, you should therefore not damage the natural protective function of the vagina as much as possible. Avoid too much intimate hygiene.

Only clean the intimate area with water, not with soaps or perfumed shower gels. These influence the ph value of the vagina. Even intimate showers, in which the water falls directly onto the genital area, should be omitted during pregnancy. When choosing underwear, cotton is much more suitable than synthetic fabrics, as it allows the skin to breathe.

This also applies to panty liners that should be bought without plastic film. If there is an infection, it is important, in addition to the underwear, to change the towels and washcloths that have come into contact with the genital region daily and to wash them at at least 60 degrees. This is the only way to kill the pathogens. To be on the safe side, your partner should also be examined. Since most infections can be transmitted through sexual intercourse, there is a risk of mutual contamination.

Could the discharge be amniotic fluid?

Even if transparent discharge is not really a cause for concern, it can still be confused with leaked amniotic fluid, especially at the end of pregnancy. If the baby’s head has not yet lowered into the pelvis, the amniotic fluid will drain off in a gush if the urine ruptures. It is different shortly before the birth, when the baby blocks the exit with his head. Then it only lets the amniotic fluid pass in droplets.

If you are unsure whether the fluid you are losing is really a discharge, an odor test will help first. Amniotic fluid smells sweet, while discharge is odorless. Another possibility is that you have simply lost some urine from the baby’s increased pressure on your bladder. The odor test also helps here. If you are still unsure afterwards, a visit to the doctor or the clinic is advisable to rule out a rupture of the bladder.

Shortly before the birth, the discharge can even increase again. It then usually goes hand in hand with a thickened consistency. Shortly before labor begins, the plug of mucus loosens on the cervix. This “drawing” may involve a small amount of blood.

Discharge is usually a method used by the body to cleanse pathogens from the uterus and vagina. If it is more of a translucent white color during pregnancy, then there is no need to worry. However, if it turns yellow, green, brownish or bloody and is accompanied by other symptoms such as itching, pain or swelling, it is better to consult a doctor.

At the end of pregnancy, it is important to consider whether the discharge has increased or whether the amniotic fluid has ruptured. An odor …

Pregnancy test: from when it is meaningful

What are cute aesthetic usernames?

What are cute aesthetic usernames?