Jellyfish and children: what to do in case of a “sting”

An intense burning, pain and finally itching: these are the typical symptoms of a close encounter with a jellyfish, at least in the waters of the Mediterranean. Here are the scientific tips on how to intervene and which remedies to use.

Ouch, a jellyfish “bit” the baby

The one with one jellyfish it is certainly one of the most frequent “negative” close encounters that can occur in our seas, in Italy and in the Mediterranean in general. A painful encounter because, upon contact with the skin, particular cells present on the tentacles of these animals release a poison which, penetrating into the skin itself, induces a strong inflammatory response.

Technically, jellyfish do not sting, but just touch them to make them release stinging substances for our skin

We know 9000 species of these invertebrates, of which about 100 are known as harmful to humans. “Luckily, the jellyfish found in the Mediterranean are not as dangerous as those that swim in other waters of the world, for example in Australia “underlines the toxicologist Marco Marano, head of the poison control center of the Bambino Gesù pediatric hospital in Rome.

What happens when you come into contact with one of its many tentacles is that you feel, at the point of contact,

which reaches its maximum peak in about an hour but which, in some cases, can last several hours.

“In the vast majority of cases, localized pain is the only consequence of the encounter with the jellyfish,” Marano emphasizes. “In some people, however, the poison released by the animal can cause a allergic-type reaction, with important symptoms that may require observation or hospitalization “.

As we have said, in the vast majority of cases there will simply be a need for some strategy that helps to block or reduce the sensation of pain, which can obviously be poorly tolerated, especially by a child.

Over time, many remedies have been proposed, some even special such as the application of urine, gradually denied or on the contrary repeated, which generates a certain confusion on the subject. It must be said that there are not many studies on the subject and that many concern contact with particularly dangerous species, such as the poisonous species of the so-called cubomedusa or sea wasps, present in the tropical belt of the Indian and Pacific oceans, therefore in the waters of countries such as the ‘Australia, Indonesia, the Philippines. Not to mention that, sometimes, these studies seem contradictory with respect to certain treatments.

“As often happens, the truth lies in the middle” comments Marano. “The thing is, the venom of the various jellyfish species is made up of different proteins, so different studies can give conflicting results because they refer to different species. In other words, something that works well for one species doesn’t necessarily work as well for another. “There are a number of recommended treatments because a general benefit from their application was observed. So let’s see what needs to be done. 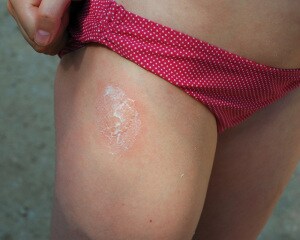 In case of jellyfish sting, creams based on aluminum sulphate or aluminum chloride can be applied to relieve the pain.

If the pain subsides and there are no other “abnormal” signs, nothing else needs to be done. However, if the pain is very intense and does not go away – this can happen if the affected area is very large – or if the child is manifesting symptoms that may suggest an allergic reaction – swelling in areas other than the affected area, difficulty in breathing, paleness, intense sweating – it is necessary to call 118 to understand how to behave or take him directly to the emergency room.

Antihistamines, cortisones, antibiotics, other drugs: when are they needed, if they are needed?

The antihistamine creams they can relieve itching, which usually arises once the pain has passed: but remember to protect from the sun the part where the cream is applied, because exposure to the sun could stain the skin.

The cortisone creams they should be used to relieve pain, but are effective only after 20-30 minutes from application, when the pain often begins to subside. Also with the aim of relieving pain, the administration of acetaminophen or ibuprofen.

IS the use of antibiotics debated in case of contact with jellyfish.

The “Nursery Rhyme of Christmas and Lupine”