Drowning risk: this is why you should NEVER leave children alone in the water

For young children, lack of adult supervision is the leading cause of death by drowning. In older children and adolescents, the tragic event instead depends on dangerous behavior or not knowing how to swim. All the tips for approaching water safely

The time that passes from the moment a child begins to have difficulty in the water to the moment he disappears below – technically we talk about submersion time – it’s about 20 seconds. This is why unfortunately it is enough to get distracted or move away for a moment from the child who is playing with water – whether it be that of the bathtub, a swimming pool or the sea – to find out, when you go back to look for him or return to him , which has now disappeared underwater.

This is what tragically happened this weekend to a 4-year-old boy in the Ferrara area, who drowned in the swimming pool of a farmhouse. But it was not the first of this 2020. In the last three months, seven children have died of drowning.

Fortunately, it is a much lower figure than what happened only a few decades ago, but which can be reduced further. “Why drownings that occur while bathing, or even playing near water in the case of small children, are never the result of chance, and therefore they can be avoided, “he says Dario Giorgio Pezzini, of the National Salvation Society, among the authors of the report.

Why do children drown

The “technical” reason for drowning is obviously in the fact that you end up in too deep water, with the “too much” depending on the height of the child. This can happen for various factors.

In the case of small children, the main cause of death by drowning is represented by the lack of supervision of the parents or adults to whom they are entrusted.

For those who are a little older, ages 10-11 and up, drowning usually depends on either not knowing how to swim or being unable to swim. having ignored some minimal rules of prudence with respect to the aquatic environment. “Either way, it means that the child lacked water safety education“underlines the expert.

So let’s see what are the potentially risky situations for more or less young children and the strategies to avoid them. Remembering that water is always both a major attraction for children and a potential danger, be it

“Sure, much depends on the age and height of the child“explains Pezzini.” A bathtub is certainly not dangerous for a teenager, but it becomes dangerous for a very young child, who even in very shallow water cannot sit up again if he slips inside “.

Some risks are related specifically to the type of aquatic environment. “Rivers and lakes, for example, tend to always be dangerous because they have uneven seabed, cloudy water or very strong currents, which can become risky even for the expert swimmer “underlines Pezzini.

“This doesn’t mean that you can’t really get close, but swimming in a river or lake must be done only in areas that we know to be safe and that are generally well circumscribed“.

Sea, the risk of deep holes and currents

In the case of the sea, the main risk is represented by the presence of holes in which the water suddenly becomes deep, whereby the child no longer touches.

“Many people think that the bottom of the sea degrades evenly towards the open sea, like a gently sloping plane, but it doesn’t always work that way. On the contrary, it can happen that even in a substantially uniform area there is suddenly a depression, perhaps even modest but such as to transform what was shallow water for a child into deep water. Where the risk of drowning increases “. 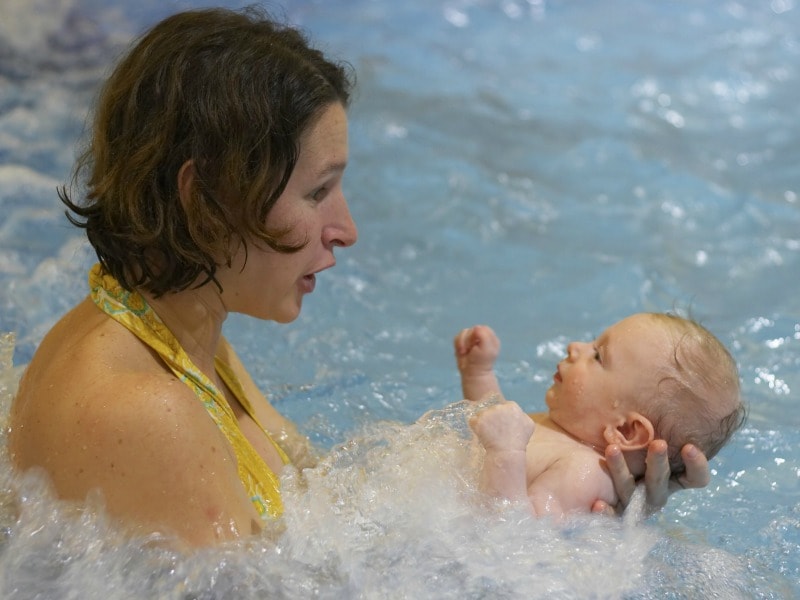 How to teach children to swim: the right approach of parents

Water must become a friendly element for children, which they should not be afraid of and the pool must be perceived as a kind of playground: we asked for these and other tips for …

Another danger is represented by the so-called return currents, which can also be very strong if the sea is rough and drag the swimmer out to sea.

Rule number 1: the importance of knowing the environment WELL

Before giving the green light to children to swim in the sea, river or lake, we should therefore be aware of the environment that you face and its potential dangers, going ahead and perhaps asking the lifeguards (or the locals if there is no rescue service) if there are particularly dangerous areas or situations.

Rule number 2: surveillance is never too much

“Must not never ever lose sight of a baby who is taking a bath or he is playing near the water “underlines Pezzini with emphasis, recalling the question of the submersion time which, alone, justifies all his insistence on this point:” The time that passes from the moment in which a child …