Canary Islands: 10 activities to do with children

Not only sea life, but in the Canary Islands it is also possible to do many other activities thanks to a temperature that generally does not exceed 28 ° even in summer. Here are 10 activities to do with the whole family.

Haven’t you decided yet how to spend this summer? You can’t stand the heat, but find it hard to give up the sea?

The Canary Islands could be for you: mild climate, temperatures that even in August vary between 19 ° at night and 27-28 ° during the day, and many activities that can be done beyond the beach and the classic bath.

Here are the travel tips for families from the Canary Islands Tourist Board.

Canary Islands, let’s discover them
Tenerife, Fuerteventura, Gran Canaria, Lanzarote, La Palma, La Gomera, El Hierro: the Canary Islands are an archipelago made up of seven islands that are located in the Atlantic Ocean off the coast of Morocco and enjoy one of the best climates in the world: they are consider the archipelago ofeternal spring, because the temperature is mild and constant all year round under the positive influence of the trade winds.

1. Take the cable car up to the volcano of Tenerife

On the island of Tenerife is El Teide, the third highest volcano in the world, after Mauna Loa and Mauna Kea in Hawaii. The visit to the volcano can be done on foot, walking for 5 and a half hours, or using a modern cable car that takes you 500 meters from the top.

All around the territory constitutes the Teide National Park, the most visited national park in Europe and the second most visited in the world. More experienced hikers can follow a path that reaches the summit, Pico del Teide (3718 meters), for which a special permit is required.

The view, both from the Belvedere, at the arrival of the cable car, and from the top of the volcano will take your breath away. You will be able to feel the presence of this great sleeping giant by smelling the sulfur-thick air that springs from the fumaroles and enjoy this geological treasure of stone, its flora (33 natural species exclusive to Tenerife) and its native fauna (the lizard of Tenerife, the blue finch and some magnificent butterflies that only live here). Upon arrival of the cable car, tourists will find a bar and a restaurant for refreshment, but also a hotel and a refuge to stay and wake up in this incredible place that is also the highest peak in Spain and a World Heritage Site since 2007. 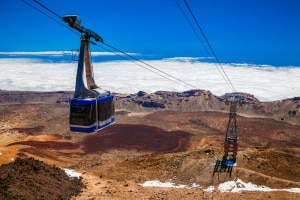 2. The golden beach of Maspalomas in Gran Canaria

If you think that the beaches in the Canaries are made up only of pebbles and dark sand, you have never been to the beaches of Maspalomas on the island of Gran Canaria. Here the sand is very fine and golden, in contrast with the deep blue of the ocean. This oasis is the right setting for sunbathing and strolling on the water’s edge. Las Maspalomas stretches for 3.5 km from La Punta, the southernmost point of the island and the ancient lighthouse, whose lantern was lit in 1890 and is still in operation today: from the terrace you can enjoy a beautiful view.

The beach doesn’t end there, Maspalomas turns into Playa del Inglés, another 4km of fine sand to the east. The entire stretch is divided into ten sectors that include beach corners for all tastes, even for practicing naturism. Each sector is served by kiosks with bars, toilets and lifeguards. Behind the beach sand dunes up to 10 meters high, where you feel a bit ‘in the desert, in fact there is no shortage of excursions on camel back among the palm trees and sand dunes. The most striking area is the first series of dunes in the Charco de Maspalomas lagoon.

3. Whale watching in the Canaries

To bring out the naturalistic treasures from the seabed, tourists have to disembark on the islet of El Hierro, the smallest of the Canaries which was declared a World Biosphere Reserve in 2000. This island also has a marine reserve with steep drops of up to 300 meters, submerged terraces, sandy platforms and caves.

Privileged site for diving with more than ten superior category spots, where the uniqueness of the volcanic territory merges with marine beauties. It is also the perfect spot for whale and dolphin watching, as different species can be seen all year round. El Hierro is also a model of sustainable tourism and fishing and a clean energy laboratory known all over the world, here the inhabitants derive almost 50% of the energy for the island from renewable resources. 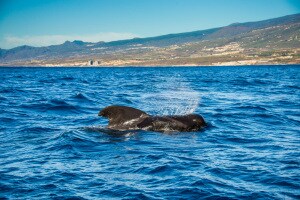 4. A journey into the heart of the ancestral forest in La Gomera

Palm-filled valleys, deep gorges, black sand beaches with crystal clear waters, lush forests and ancient forests cooled by streams. We are in La Gomera, the last strip of land touched by Christopher Columbus in 1492 before the discovery of America, where the forests are lush and the valleys covered with palm trees and unspoiled nature.

It’s a real one natural paradise, where species that have disappeared elsewhere survive, and an ideal place for hiking thanks to a network of over 600 kilometers of trails. The island was awarded as a World Biosphere Reserve in 2011, in the category of excellence, for the pristine nature of its marine and terrestrial ecosystems: for example the laurisilva, the laurel forest of the Garajonay Natural Park, a green mass of vegetation prehistoric that survives only in La Gomera, thanks to its incredibly temperate climate. On the island you can go trekking to explore the island on foot and by bicycle.

5. A ride on a camel at the Oasis Park in Fuerteventura

Oasis Park Fuerteventura is one of the most important wildlife parks in the Canary Islands. Most of the animals found in this zoo have been seized from private individuals who had bought them illegally or come from other structures that can no longer keep them safe, and here they are reintroduced into nature, recreating their natural habitats.

Oasis Park has the largest camel population in Europe. Let yourself be carried away by this incredible animal, arrived …

The Fox and the Grapes: Phaedrus’s Tale