The ultrasound scans to do during pregnancy

Ultrasounds to do in pregnancy: how many ultrasounds are done during pregnancy? Exams and ultrasound scans month by month, when are they done?

The ultrasound scans to do during pregnancy

If the pregnancy is physiological and there are no particular risk factors, there is no need to do so many ultrasound scans: according to the Italian health authorities and scientific societies, two or three ultrasound scans may suffice for the whole nine months. In particular, the Guidelines of the Italian Society of Obstetric and Gynecological Ultrasound (Sieog) recommend three ultrasound examinations: in the first, second and third quarters respectively. And three ultrasounds are those “passed” in general by the National Health System. Of course, all this is not valid in the presence of particular risks or pathological situations: in these cases, the doctor will evaluate the opportunity of more frequent and possibly specialized ultrasound examinations, such as for example level II ultrasounds or doppler of the uterine arteries.

The best time to do the first trimester ultrasound is around 12 weeks. At this time, in fact, we are no longer limited to “dating” the pregnancy and to verify the number of fetuses and their vitality, but it is also possible to carry out a first important evaluation of the baby’s organs and especially of the heart.

Furthermore, it is precisely between 11 and 13 weeks that it is possible to carry out the combined test to screen for the risk of chromosomal abnormalities: a test consisting of the measurement, by ultrasound, of a parameter called nuchal translucency (the thickness of the skin behind the neck of the fetus) and the dosage in the maternal blood of some substances produced by the placenta.

Along with the first trimester ultrasound, it is the most important of pregnancy. It is done around 20 weeks and allows you to examine all the organs of the fetus, from head to toe: the difference from the first ultrasound is that the fetal organs can be seen even better and, in addition, some structures, especially the brain, can be analyzed very well, which at 12 weeks they are not yet fully developed.

Furthermore, during the morphological ultrasound it is possible to define with certainty the sex of the baby and to evaluate the amount of amniotic fluid and the position of the placenta.

The second trimester ultrasound has the main goal of check the size of the child and the normality of his anatomy. If there is a suspicion that there is some problem, the doctor directs you to an ultrasound called di II level, to be performed in specialized centers, called second level, which allows to analyze the organs with greater accuracy.

The third trimester ultrasound, which is done around 32 weeks, allows us to evaluate how the fetus is growing, its presentation – which can be cephalic, breech or transverse – the position of the placenta and the amount of amniotic fluid.

In addition, some organs are analyzed in detail – in particular the brain, heart, kidneys, stomach and bladder – for which malformations could become evident that were not visible before. 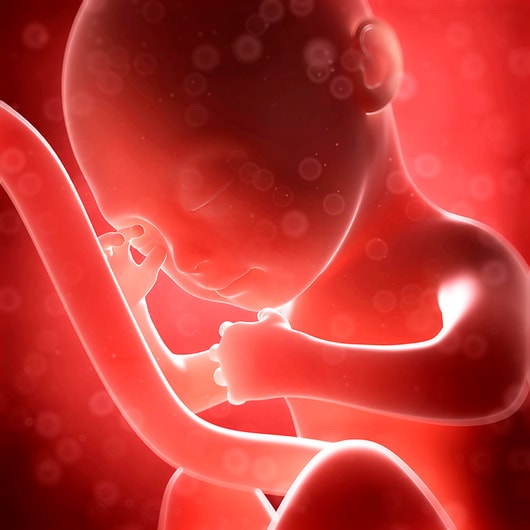 Ultrasound of the fetus: the images month after month

What happens if the ultrasounds become author’s? The result is the following: nine wonderful images documenting the development of the fetus in the mother’s womb month by month ….

Is it useful to do extra ultrasound scans during pregnancy?

In Italy, in reality, many more ultrasounds are done of the two / three provided by the Guidelines, also because there are many women who turn to private specialists, now almost all equipped with an ultrasound system.

Let’s face it right away: under normal conditions, these extra ultrasounds they have no particular medical value, because all the information you need can be collected during the three exams required by the Sieog guidelines.

It is true, however, that the “control” ultrasound scans performed in the gynecologist’s office reassure the mother about the vitality of her baby. Additionally, some scientific data suggests that ultrasound images – 2D, but also 3D and 4D – help build a relationship with the baby already during pregnancy.

Women’s Day: how to explain it to children

All the trends of Christmas 2019 – Holidays

All the trends of Christmas 2019 - Holidays