Pregnancy week by week with pictures

You have discovered that you are pregnant and you are at the beginning of a wonderful adventure! When a woman discovers she is pregnant, the questions are many: what are the symptoms in the first few weeks? Which exams are to be done during pregnancy? What happens to the mother and the baby? How does a woman’s body change during gestation and how does the fetus grow during the nine months of pregnancy? In this guide, which will accompany you during the 40 weeks of pregnancy, you will find all the answers and by clicking on each week of pregnancy you can find out what happens to you and your baby.

The trimesters of pregnancy

Pregnancy splits into three quarters. Even if nothing is visible on the outside, the first trimester is the most important phase for the subsequent continuation of the pregnancy.

Your body is not showing any noticeable changes yet, however if conception has taken place a lot is happening inside you without you noticing.

Are you still waiting for the period and if you are looking for a pregnancy you are crossing your fingers so that they do not come. You will be able to take the pregnancy test on the first day of your delay. If the test is positive, then you will take a blood test to confirm the result.

Most women may not feel any changes in their bodies, not least because in the third week of pregnancy, conception has just occurred. You may have lost your appetite due to a little nausea and therefore you may have lost weight, or on the contrary you may feel a little swollen or have gained a little weight because you are in the grip of an unbelievable hunger.

You can begin to feel the first symptoms of pregnancy: nausea, fatigue, sore breasts. The urine test already detects the presence of the hormone hCg: positive!

The embryo measures 1.5 / 2.5 mm. It can be seen with a transvaginal echo. The head and the body can already be distinguished, and the little heart begins to beat.

The embryo measures 4/6 mm. The first organs begin to form, and a first draft of the placenta. The increase in hormones can lead to worsening in morning sickness. 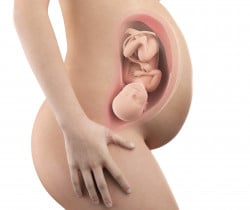 L’embryo at 8 weeks size 8/11 mm. It is the right time for the first visit. In this week the sex is differentiated, the ossification process begins and the first spontaneous movements begin to be present

The fetus (from the end of the third month it is no longer an embryo!) is 13/17 mm long and weighs about 1 gram. The sex is now established, and the elbows and the first joints are formed.

The fetus measures 27/35 mm and weighs 4 grams. It has open eyes, external ears and lips have formed, and the “tail” disappears. The external genitals begin to form.

The fetus weighs about 7 grams. The head is about half of the total body size. Nails begin to grow on the fingers.

After the transfer of an embryo what to do or not to do?

Remedies for headaches in pregnancy

Remedies for headaches in pregnancy