Elena is 33 years old and has been a mother of four children for a month. We followed her to the delivery room at the birth of her twins Benedetta and Lorenzo. This is the exciting story of what happened, correlated by the photos of the wonderful experience of becoming a mother for the third and fourth time … together. (ATTENTION, SOME IMAGES COULD TURBLE THE MOST SENSITIVE PEOPLE)

The protagonist of this second photo report from the delivery room is Elena, 33 years old. At his side Tommaso 41. Elena and Tommaso already have two children: one of 5, Alessandro, and one of 8, Leonardo. Two boys.

Then the “surprise”. A positive test, an unwanted pregnancy. And the discovery of expecting two children, two twins. So many fears at the beginning. Happiness then.

Benedetta and Lorenzo were born on November 14 last at the Santa Maria della Misericordia Hospital in Perugia. The birth of mother Elena, like that of Pamela published two weeks ago, was followed and immortalized step by step by our photojournalist Anna Catalano, specialized in childbirth photos and present at the moment of the birth of the twins. 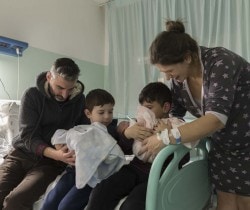 An unexpected twin pregnancy. A birth different from what one would expect. Elena, 33 years old and already a mother of two children, is the second protagonist of a series of …

“I’ve always liked the idea of ​​having three children,” Elena tells us on the phone. “But, between saying, I like it and I want it, there is a lot …

My husband has always known this, but it was something we had not yet considered. We were afraid of the idea of ​​struggling with a newborn, especially since we had passed the baby food and diaper phase and our children were now independent: we already see them grown up. So there was no mention of the possibility of starting all over again “.

However, at some point, Elena found herself pregnant. “I didn’t want to believe it. I was 10 days late and blamed it on stress,” explains the new mom.
“I had been to a concert here in Perugia and back home I did a test that I already had around. It was positive … I thought it had expired! I tried again the next day and I was already 4-5 weeks old! I think about it in retrospect … the group was The Fast Animals and Slow Kids, the album was called ‘Maybe it’s not Happiness’ and the tour ‘Maybe it really is’. the perfect title for this unexpected pregnancy … I didn’t think it was Happiness, but I had to change my mind “.

Fear… pregnant for the third time

Elena then discovers she is pregnant without having looked for him. She makes an appointment with the gynecologist and goes there with her husband. Both were ready, prepared for a third baby to arrive. Instead…

“As soon as the gynecologist places the probe on her stomach, during the ultrasound, she tells us: ‘I don’t know how to tell you, there are two'”.

The frost. Elena and her husband are bleached. “Casper effect” he adds with a smile.
“Fortunately I was already lying on the bed. It’s true, it was great news and everyone likes the twins. But they are also scary. We already had two children. Four… how to do it? How to manage everything? ”

Father Tommaso shares the same opinion: “Inside me, darkness! Because yes, I admit, I turned everything off. After the visit we got into the car and without saying a word, my wife and I went home with an absent gaze … nice trauma! I preferred not to think about it “.

“If I was afraid of the arrival of a baby, imagine two,” continues Elena. “We rolled up our sleeves: there was to change the car, fix the house. So many worries, even practical ones “.

We spent these first few months like zombies. Meanwhile the pregnancy continued, between nausea at the highest levels with days at the toilet “Elena always explains.

Then fainting, swollen legs.
Lots of alarms, but luckily nothing serious.
The months have passed like this and the date of birth was getting closer and closer. “Everything, every second, brought me back to the countdown. Their arrival was imminent and I had to be ready, but I was not“confesses Thomas.

“The two children from the ultrasound were hail, but cephalic. My other two children were already born with natural parts and the gynecologist told us to try these too”, Elena admits: “I was more afraid to do a caesarean than to try to give birth naturally Dr. Epicoco [Giorgio Epicoco, primario dell’U.O.C di ostetrica e ginecologia dell’ospedale Santa Maria della Misericordia di Perugia, ndr] it kept me in check. He reassured me, explaining that everything was going well “.

“Pregnant women are normal people. The same goes for Elena” explains Dr. Epicoco over the phone. “Elena was very keen to give birth naturally: she didn’t want to waste time going home, already having two children. And she had the conditions to give birth well. Of course, it is necessary to be assisted by experienced staff, but it can be done. For example, we also assist i twin breech births“.

Elena is arrived at the end of this twin pregnancy. 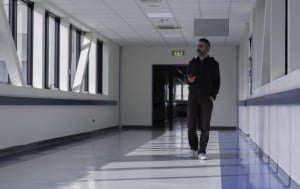 Elena in the delivery room during the monitoring.

“My presumed delivery date was November 23 and Benedetta and Lorenzo were born on the 14th. They were born 9 days earlier, as if they were a single child.
I was at 38 + 2 and …

Can I take the baby to the sea and let him sunbathe in the summer?