Hormones of pregnancy: what they are and how they work

The success of a pregnancy largely depends on the hormones that regulate the activity of the parts involved in the mother’s organism. Here are the main hormones and what they do

Pregnancy involves noticeable changes in the female body. Not all changes are visible, but even those that we cannot observe can have a heavy influence on the progress of the pregnancy itself and on the state of well-being (or relative malaise) of a pregnant woman. This is what happens in particular following theaction of hormones, absolutely essential protagonists of the long path that leads to becoming mothers.

Let’s see what you need to know on the subject, starting with information from yourhormones.info, an educational resource from the UK Society of Endocrinology.

A hormone is a chemical produced by specialized cells that are typically located in an endocrine gland and released into the bloodstream to send a message to other parts of the body.

In fact hormones are also called chemical messengers and constitute on the whole a effective communication system between cells located in distant parts of the body. Once it reaches the target cells, the hormones change their behavior. Insulin, for example, after being released from the pancreas prompts muscle and fat cells to store glucose from the blood.

During pregnancy, the correct balance between the various hormones involved, produced at first by the ovaries and, subsequently, by the placenta: in fact, they maintain the right conditions so that everything ends in the best possible way both for the mother and for the baby. 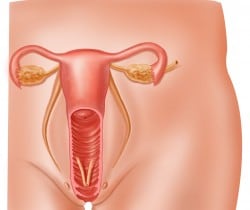 The female reproductive system, what it does and how it is made: photo gallery

Conception and the start of a pregnancy can seem mysterious events: to understand what happens and what may not work in cases of …

The very early stages of pregnancy

Sex in pregnancy: taboos burned at the stake

Hormones come into play from the first moments of pregnancy: it is in fact the human chorionic gonadotropin which, triggered by the fertilization of the egg, “warns” the body to prepare for pregnancy. On the other hand, it is obvious that, immediately after conception, the embryo must be able to communicate its presence to the maternal organism, so that it can “organize itself” accordingly.

Chorionic gonadotropin can be detected in the urine as early as 7-9 days after conception, and is the hormone identified in the pregnancy test, starting with the common do it yourself test which you can buy in a pharmacy or supermarket. It is also partly responsible for the frequent urge to urinate that pregnant women often experience as early as the first trimester of pregnancy: this is because increased gonadotropin levels cause an increase in blood supply to the pelvic area and kidneys, which in turn are activated to produce more urine.

However, the main task of chorionic gonadotropin is another, and that is to regulate the levels of two other fundamental hormones in pregnancy: estrogen and progesterone.

Pregnancy, the role of progesterone

High levels of progesterone are required throughout pregnancy. In the first weeks of waiting, progesterone is produced from corpus luteum, a temporary endocrine gland that arises from remains of the ovarian follicle after her rupture, and allows for a normal course of pregnancy.

In particular this hormone:

Once the placenta is formed, it will be the latter that produces progesterone by converting the cholesterol present in the maternal blood (to take care of it is a particular type of placenta cells called trophoblast). Between the sixth and ninth week of pregnancy the production of progesterone passes completely from the ovaries to the placenta, and at this point the progesterone is enriched with new tasks:

The role of estrogen

All these very important activities carried out by progesterone, however, require estrogens which stimulate both its production and functionality.

Estrogen is also produced first by the corpus luteum and then by the placenta or, better, by what specialists call fetal-placental unit. In practice: the fetus produces a hormone called estriol which, after passing to the placenta, is transformed into other estrogens.

Levels of these hormones also rise until birth and their effects are different:

Other hormones produced by the placenta

The placenta also produces other hormones that are responsible for regulating the various functions of both the mother and the baby.

Placental lactogenic hormoneIts function is not yet fully understood, but it is thought to help promote the growth of the mammary gland and regulate the mother’s metabolism by increasing the level of nutrients present in the blood, so that they can be used by the fetus.

Hormones of pregnancy: what they are and how they work