Diet in pregnancy: tips. The ‘ideal’ diet does not exist, but there are some fixed points that apply to everyone.

When you are expecting a baby, you always pay close attention to what you eat and go in search of the best diet, which does not put on too many pounds but above all which guarantees the correct development and well-being of the baby. There is no such thing as an absolute ‘ideal’ diet, of course, because it must be calibrated on the general health of the future mother, on her physical conformation, on the lifestyle she leads, and in this sense the guidance of a good gynecologist is always essential. However, there are some fixed points that apply to everyone and concern the foods to be preferred, the right combinations between the various nutritional principles and the mistakes not to make.

For this we asked Dr. Gabriele Piuri, clinical assistant of dr. Attilio Speciani (well-known Milanese immunologist and allergist, scientific director of the website www.eurosalus.com) and PhD student in experimental and clinical nutrition, to indicate some ad hoc dietary rules for the future mother; to Dr. Valentina Chiozzi, Nutritionist Biologist always from the team of Dr. Speciani, we asked instead to suggest a weekly menu-type.

The metabolism of the mother and the child are closely related to each other, so it is important that the mother does not ‘eat for two’, but feeds correctly so as not to overfeed herself and her baby. The risk? That an overproduction of insulin is activated which reflexively stimulates an excessive growth of the baby, with all the consequent risks (fetal suffering, birth complications).

Of course, we must not fall into the opposite excess of not eating enough: for example, there are women who, for fear of gaining too much weight, limit their diet as much as possible, others who eat very little due to nausea, or those who, for fear of contract toxoplasmosis, ban raw vegetables and fruit, which instead provide valuable substances and can easily be consumed as long as you wash them well. 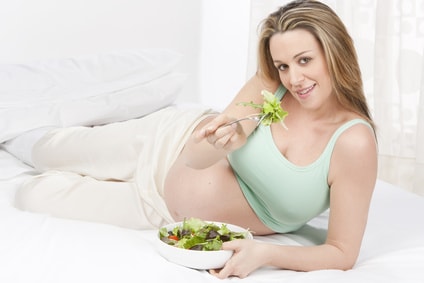 When you are expecting a baby, you always pay close attention to what you eat and go in search of the best diet. The absolute ‘ideal’ diet of course does not exist, because it must be …

2 – Combine carbohydrates and proteins with every meal.

The particular hormonal state of pregnancy in itself increases insulin resistance (the substance produced by the pancreas which has the function of rebalancing the concentration of glucose in the blood), i.e. the mother’s cells ‘feel’ less insulin and this determines an increase in production, since to obtain the same effect it is necessary to release a greater quantity of this hormone.

“To keep production under control, it is a good rule combine carbohydrates and proteins in all main meals“advises Dr. Piuri:” eating only carbohydrates in fact increases the glycemic peak, which produces more insulin “explains Dr. Piuri,” while combining them reduces the amount of carbohydrates introduced and slows down their absorption, counteracting the sudden increase in blood sugar concentration.

Ok then to the carbohydrate / protein association since Breakfast, where it is fine to enter:

Milk lovers keep in mind that milk, despite being a well-balanced food, contains more carbohydrates than proteins (lactose is a sugar and sugars are simple carbohydrates!), So if you eat milk and cereals you need to add a protein counterpart. which is not guaranteed by the milk itself, such as a generous spoonful of almonds “.

Pregnant increases the need for protein, essential for the growth of the fetus.

What are the best proteins? “Contrary to what one might think, those with the highest biological value are not in the meat but in the eggs, as they have 100% compatibility with human proteins, more than meat, fish and dairy products, which instead have a biocompatibility of 80% “replies Gabriele Piuri.

And i legumes? “On their own they have a compatibility of 40%, which rises to about 80% when combined with whole grains.

Also oil seeds they can constitute a decent protein source despite having a lower biocompatibility: almonds, hazelnuts, walnuts, pistachios, accompanied by some brown rice biscuits, can be an ideal snack, also perfect for those suffering from nausea “.

When it comes to carbohydrates, one immediately thinks of wheat, of which the flour or pasta that is usually consumed are made, and instead there is a great variety of cereals. For example:

These would go alternating regularly with each other to enrich our diet as much as possible.

“To get the best out of the properties of these grains, we should consume them whole and not to choose the refined varieties “points out Dr. Piuri.

“Whole grains are richer in fiber, which increase intestinal motility and help eliminate waste (a significant advantage in pregnancy, when it is easy to suffer from constipation, especially in the last months); the fibers also allow you to regulate the raising blood sugars by slowing their absorption fibers therefore prevent glycemic peaks and reactive hypoglycemia, even allowing us to occasionally consume a slice of cake (naturally prepared with wholemeal flour!) at the end of the meal without too much guilt. Obviously, in addition to whole grains, fibers are also contained in abundance in vegetables and fruit, especially if consumed with the peel “.

The reason is certainly not to prevent the baby from being born with skin rashes, as popular beliefs say, but to accustom the child he carries in his womb to ‘taste’ and become familiar with all foods.

“The cravings have a particular meaning from an immunological point of view” explains Piuri: “if the woman goes in search of ‘strange’ foods, it is right that she indulge her desire, varying her diet as much as possible, because in this way makes available to the fetus a large number of antigens (i.e. substances recognized by the immune system), allowing him to begin to develop tolerance towards them. In short, already during his intrauterine life, the baby does an effective ‘training’ to learn how to defend himself from what he will know more closely at the time of weaning. But the benefit is not only for the fetus: a more varied diet also allows the woman’s body to maintain a correct tolerance towards what she eats and more generally the external environment. Food intolerances cause an increase in the general levels of inflammation of the organism which is often the cause of many typical disorders of pregnancy, from nausea to cystitis, from stomach acid to intestinal problems. The best way to maintain tolerance is to vary as much …

How to go back from bottle to breast

SMILES AND SONGS TV: the initiatives for Sanremo 2021

SMILES AND SONGS TV: the initiatives for Sanremo 2021