Birthmarks in pregnancy: when they start and the most common

A sudden desire for chips (but also for pizza, chocolate, strawberries etc. etc.) of the future mother and immediately the future father takes off in search of the much desired food. Woe to running the risk that the baby is born with a ‘birthmark’ on the skin. At least so it was said in the past, medicine instead claims that …

Birthmarks in pregnancy: legend or reality?

“Let’s start by saying that the ‘cravings’ have no scientific basis “ underlines Valeria Savasi, Researcher gynecologist at the University of Milan and Head of the Assisted Reproduction Center of the Luigi Sacco Hospital in Milan “in the sense that there is no correlation between presumed unfulfilled cravings during pregnancy and the appearance of spots, of any like, at birth. “

So why do you have ‘cravings’ in pregnancy?

The reasons are essentially two.

“It is a discourse that has been valid above all for some years now, since there is an increasing attention towards the pregnancy event” explains the gynecologist: “there are fewer and fewer children and they are always later, and when it finally happens of getting pregnant, all the attention of the couple and of all the relatives pours into pregnancy. Husbands too have a much more caring attitude: just a few decades ago seeing the partner at the gynecological examination was an exception, now it is rare not to see them … “

Satisfy the cravings or not?

Even if they have nothing to do with the appearance of skin spots, birthmarks are still the expression of a need, physical or psychological, therefore, within the limits of reasonableness and if there are no contraindications related to particular situations (see ad eg raw cured meats for those who have not contracted toxoplasmosis), it is worth satisfying them. Paying attention of course to the quantities, if you do not want to get fat visibly!

Take the quiz What can pregnant women eat?

Birthmarks in pregnancy: when do they start?

Is there a time when the cravings begin? In reality there is no particular period, they could appear immediately, being linked to the hormonal change. Therefore, they could be there from the first weeks of pregnancy.

But even later. One of their characteristics is that they can continue throughout the pregnancy.

Birthmarks in pregnancy: the most common

But what are the most common birthmarks in pregnancies? There are all kinds. We collected them in this gallery by asking the mothers of our community. 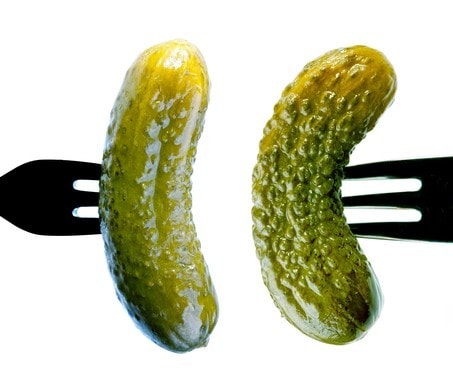 There is the classic craving for gherkins or pizza at the most unlikely hours, but also that of a sandwich with salted tongue, vinegar, chilli pepper, eucalyptus or lemon with …

Between most common birthmarks in pregnancy: