When the baby’s 5 senses develop in the belly

All of us mothers ask ourselves over the course of the nine months what life inside the belly can be like. Indeed, intrauterine life despite the closed environment is full of stimuli which, however, arrive in a very muffled, and in a certain sense filtered way.

If you swim and dive your head underwater you know that sounds come in very different ways (this is because sound waves in water travel much faster than in air, but our hearing system is made to hear sound waves better. transmitted in the air).

The fetus uses the senses that are gradually being refined to collect and process information, and already at 20 weeks of pregnancy its nervous system is developed in such a way that it already allows it to kick and communicate with the mother.

Touch, sight, hearing, taste and smell are gradually stimulated by everything that happens in the mother’s body and by the sensations that come from the outside.

What the mother eats, how much she rests, how she reacts to various situations, everything is transmitted to the fetus. For this reason once the baby is born the mother’s voice will be familiar to him as well as the foods he will receive through breastfeeding and the music you have listened to and continue to listen to.

How the fetus “listens” to the mother 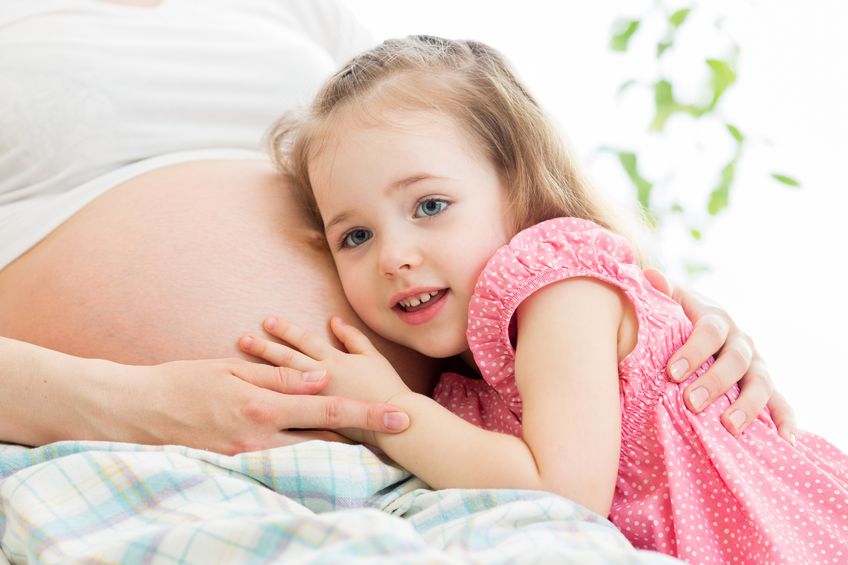 The child notices every change that takes place in the mother’s life, in her daily life.

How much it rests, how much it is in motion, and the different degrees of noise to which it is exposed.

If mom is under stress, her body releases a hormone, the cortisol (also called the stress hormone), and the fetus responds to these changes by regulating its cortisol levels.

It is also very interesting what was discovered during a study regarding the sleep-wake rhythms of the mother.

The active sleep phase is similar to the REM phase,

It is thought that the more regular and repetitive the mother’s habits (sleeping, eating, exercise or relaxation) are, the easier it will be for the baby to develop her own habits after birth.

The sense of touch

Touch is the first sense that develops in the fetus. It begins to form between 7-8 weeks of pregnancy when it begins to move.

The sense of touch begins with the development of the sensory receptor in the face, mainly on the lips and nose. Over the next few weeks, touch receptors begin to develop on other parts of the body.

Around weeks 10 and 11 the palms of the hands begin to become sensitive and with them they can “feel” the face, even if they are inclined to move away from the stimulus if they touch the cheek.

At first they have little control of movement but towards the end of pregnancy they tend to get closer to touch.

This can be a sign of the sucking reflex that is fundamental to breastfeeding: if you stroke a baby on the edge of the mouth or cheek, it will tend to turn towards the stimulus ready to suck.

By 12 weeks, the feet become sensitive.

Towards the 14th week the whole body of the fetus responds to tactile stimuli and as the space becomes narrower in the uterus, the more frequently the cord will touch the baby.

Just as babies tend to use their mouths to explore anything in the first few months, so too do they put their fingers or toes in their mouths. They probably enjoy thumb sucking even if they have not yet associated action with a consolation of hunger.

Near birth, the fetus is slightly squeezed by Braxton Hicks contractions. In addition to preparing the uterus for childbirth, it seems that they also serve to stimulate the senses and the brain of the unborn child.

Brain scans on unborn babies suggest that fetuses they do not feel pain until after 30 weeks, when the somatosensory neural pathways stop developing. However, by the middle of the third trimester, the fetus is able to appreciate a full range of sensations, including heat, cold, pressure and pain in every part of the body.

It is probably the most studied sense of all because it is also the easiest to stimulate before birth. The first studies on the subject date back to the 80’s when it was shown that babies hear while they are in utero and are able to distinguish and identify some patterns.

In a classic study, DeCasper and Spence (1986) asked pregnant women to read aloud from The cat in the hat during the last six weeks of pregnancy. It was found that after birth the babies showed a preference for this reading presumably based on their prenatal exposure.

After these initial studies, more research has been published suggesting that fetuses are able to hear and even learn in the womb.

Babies react to noises around 24 weeks when the ossicles of the ear canals harden and begin to work together.

The uterine environment is full of sounds or sounds coming from within such as the beating of the heart, intestinal peristalsis or the sound of blood being pumped through the umbilical cord.

The noises coming from the outside reach the child in a very muffled way.

Many sound waves are rebounded directly from our body, others absorbed by tissues and skin. High-frequency sounds are bounced more easily while low-frequency sounds get to the baby. For this reason, the fetus can probably hear the father’s voice quite easily.

Music in pregnancy: the benefits for the baby

From about 27 weeks the baby opens and closes his eyes ma sight will be the last of the 5 senses to mature during intrauterine life.

Everything is quite dark but if mom is at the beach in a bathing suit she can probably see an orange glow.

She can probably see the tone of the glow rather than the color because the baby’s vision in utero is thought to be black and white. The perception of color is thought to develop around 2 months after birth and this is why some toys for young children are created in black and white, in order to make it easier for the baby to see them in more detail.

What does a newborn see? Sight in the first year of a newborn’s life

Although it is dark inside the uterus, human skin lets light through and provides some illumination for the developing fetus. According to Lancaster University psychologist Vincent Reid who has studied this problem, the uterus can be a surprisingly bright place, “analogous to being in a room where the lights are off and the curtains are drawn.”

Based on this premise, Reid and his colleagues studied the reaction of third-trimester fetuses to patterns of light points. The children’s reactions to different light patterns were monitored using high-definition ultrasound. The researchers found that fetuses were about twice as likely to follow the movement of dot patterns that resembled a human face, the same pattern and preference that has been demonstrated in babies after birth.

This suggests that our preference for human faces may be innate and not simply the result of experiences that occur after birth. It also clearly demonstrates that the fetus actively responds to the outside world long before it is born.

Taste and smell are intrinsically intertwined because our sense of taste is actually 90 percent made up of smell. Some aromas, such as vanilla, carrot, garlic, anise, and mint, have been seen to be transmitted into the amniotic fluid, in which children routinely live and drink several centiliters a day.

From about 12 weeks of pregnancy, the baby begins to swallow amniotic fluid.

This liquid carries with it the flavors and smells of the food that mom eats.

By week 35, the taste buds are sufficiently developed to recognize the flavors of what mom eats.

Studies have shown that fetuses begin to have their culinary preferences already during life in the baby bump. For this reason it is important to vary foods during pregnancy so that the baby begins to get used to a variety of flavors.

To test this theory, one group of pregnant women were asked to drink carrot juice every day during pregnancy, while another group was told to avoid it entirely. Once the babies started eating solid foods, the researchers fed them cereals made with water or carrot juice. They found that babies exposed to carrot in amniotic fluid ate more carrot-flavored cereals.

As for the sense of smell, this is already well developed at birth. It has been proven that already at three days of age, the baby recognizes the smell of his mother’s milk.

Caffeine in pregnancy and breastfeeding: Can it be consumed?