Ultrasounds in pregnancy, what are they for?

There are 3 recommended ultrasound scans and they are the first that is done within 11-12 weeks of pregnancy and is also called a dating ultrasound.

The second which is also called morphological or structural and the third obstetric ultrasound which is done in the third trimester of pregnancy.

However, most pregnant women prefer to do more through a private gynecologist, but if the pregnancy proceeds normally, the extra ones are not necessary.

If you are expecting twins, for example around 12 weeks, you can tell if they are homozygous (identical) or heterozygous twins.

The first ultrasound can be anticipated in case of blood loss or particular pain to verify that it is not a threat of abortion or an ectopic pregnancy.

Attention if you book an ultrasound too early, like before 5 weeks or around 5 weeks and you don’t see anything or only the gestational chamber, it can be a very normal thing. Anticipating ultrasound scans too often causes mothers to worry unnecessarily.

What are the quarter-by-quarter ultrasound scans for?

An ultrasound may be required for a variety of reasons during pregnancy. The doctor may also decide to increase the frequency if he has detected a problem in a previous ultrasound or in the results of a blood draw. Ultrasound scans may also be done for non-medical reasons, such as to deliver a souvenir image to parents for or to determine the baby’s sex.

Although ultrasound technology is safe for both mother and baby, healthcare professionals discourage the use of ultrasound when there are no medical reasons or benefits.

Ultrasound in the first trimester of pregnancy

In the first trimester of pregnancy (weeks 1 to 12), an ultrasound can be done to:

Ultrasound in the second and third trimester of pregnancy

In the second trimester and third trimester, an ultrasound can be done to:

There are two main parameters that are monitored in ultrasound scans: biparietal diameter (BPD) and head-to-tail length (CRL).

The CRL is the length that goes from the tip of the head to the butt so to speak. The biparietal diameter instead considers the distance between the two lateral bones of the skull.

These measurements that are taken at the first ultrasound are the basic reference and then serve to monitor growth in subsequent ultrasounds.

In the second trimester it will also be possible to measure the length of the femur, another important parameter to evaluate fetal growth during gestation.

The beauty of ultrasound scans in pregnancy 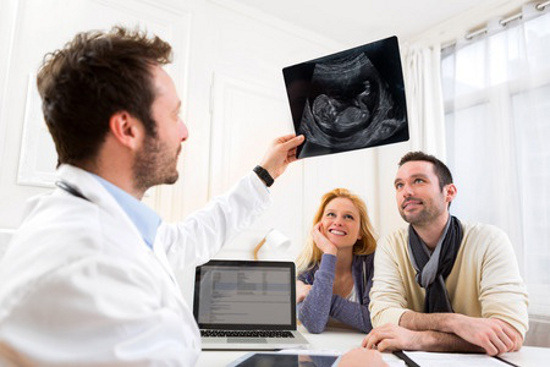 The first look at your child is an emotion that is never forgotten. And this is what finally makes us feel real the pregnancy that perhaps until that moment had passed in dullness or had manifested itself by dint of nausea.

Always try to let your boyfriend accompany you because it is an experience that must be shared (even if there are problems, but we hope not!). Get ultrasound photos or videos if possible, as they are always a good memory to keep.

If you do your first ultrasound around 12 weeks you will have the chance to see a complete miniature baby. You can see the profile of the face, the little hands and the feet that move frantically. You will also see their little heart beating fast. Sometimes you will see him yawn (if echoed in 3D) or put his hands (or feet) in his mouth.

On your first ultrasound, don’t worry if your doctor tells you there is a growth discrepancy. The date of delivery and the weeks of gestation are calculated based on the date of the last menstruation. So it may be that you have ovulated earlier or later than the expected period. He will schedule a further visit within a week to confirm the date of the pregnancy.

How to prepare for an ultrasound

Types of ultrasound in pregnancy

To get clearer images, gynecologists can choose to do a transvaginal ultrasound. This type of ultrasound is usually used during the early stages of pregnancy, when acquiring a clear abdominal image may be more difficult. A small ultrasound probe is used which is inserted into the vagina. The probe rests against the back of the vagina.

Unlike a traditional 2D ultrasound, a 3D ultrasound allows the doctor to see the width, height and depth of the fetus and your organs. This ultrasound can be especially helpful in diagnosing any problems that may arise during pregnancy. A 3D ultrasound follows the same procedure as a standard ultrasound, but uses a special probe and software to create the 3D image. It also requires specific training for the doctor, so it may not always be available.

A 4D ultrasound can also be called a dynamic 3D ultrasound. Unlike the other types, a 4D ultrasound creates the video of the movement of the fetus. Create a better picture of the baby’s face and movements. Plus, it captures highlights and shadows better. This ultrasound is performed in a similar way to other ultrasound scans but with specific tools.

If the doctor suspects that the baby may have congenital heart defects, fetal echocardiography is done. This test can be done in a similar way to a traditional ultrasound, but it may take longer. Captures an in-depth image of the fetus’s heart, showing its size, shape and structure. This ultrasound also offers information on how the baby’s heart works, which can be helpful in diagnosing heart problems.

Basal thermometer: what it is and how to use it to get pregnant

Basal thermometer: what it is and how to use it to get pregnant