The first month of pregnancy

The first month of pregnancy runs from the first day of the last cycle to 4 weeks + 3 days later.

In the meantime, however, great changes have taken place because a new life is forming from a single microscopic cell. It is a real miracle!

What Does One Month of Pregnancy Really Mean?

Why are we talking about the first month when the embryo is actually only about 14 days old at the end of the first month? Welcome to the first (and certainly not the last) confusing question of pregnancy: thegestational period.

Pregnancy is calculated, or dated, from the first day of the last menstrual cycle.

How to count the weeks of pregnancy

In a 28-day cycle, the first month of pregnancy consists of a fortnight in which you are potentially mothers but nothing has happened yet. As happens every month, the follicle is formed that contains the maturing oocyte, which will be expelled from the ovary at the time of ovulation.

In the initial two weeks, therefore, no pregnancy was in progress, but it is counted precisely from the date of the last menstruation, because the actual date of conception can be rather difficult to define. Also, before we knew so much about conception, it was known that women (on average) tended to give birth around 40 weeks after the start of their last menstruation. So, if you are 1 month pregnant, it means that your last period started about 1 month ago (in an ideal cycle of about 28 days).

Still in the idea of ​​an ideal 28-day menstrual cycle, being one month pregnant means that conception occurred about 14 days earlier. So your baby will always be “younger” than pregnancy dating. Don’t worry – the whole world of obstetrics and fetal development revolves around the gestational age, so sticking to that number means being in line with everyone else’s milestones and expectations.

What happens in the first month of pregnancy?

Generally when you decide to have a baby, you start taking thefolic acid (I recommend it is essential !!!) and there were targeted relationships. Rarely, those who decide to have a baby do not make calculations and have intercourse at will. It is part of a woman’s psychology to reach the goal as soon as possible once the decision has been made…or am I wrong? And then off with the dances on fertile days.

After ovulation (we are in the third week) the egg cell moves towards the uterus along the fallopian tube. It is here that the encounter and fertilization with one of the partner’s millions of sperms takes place. Once conception has occurred, the resulting cell (zygote) undergoes a series of cell divisions as it continues its journey to the uterus. It is at the moment of egg cell and sperm cell fusion that your baby’s genetic background is determined. 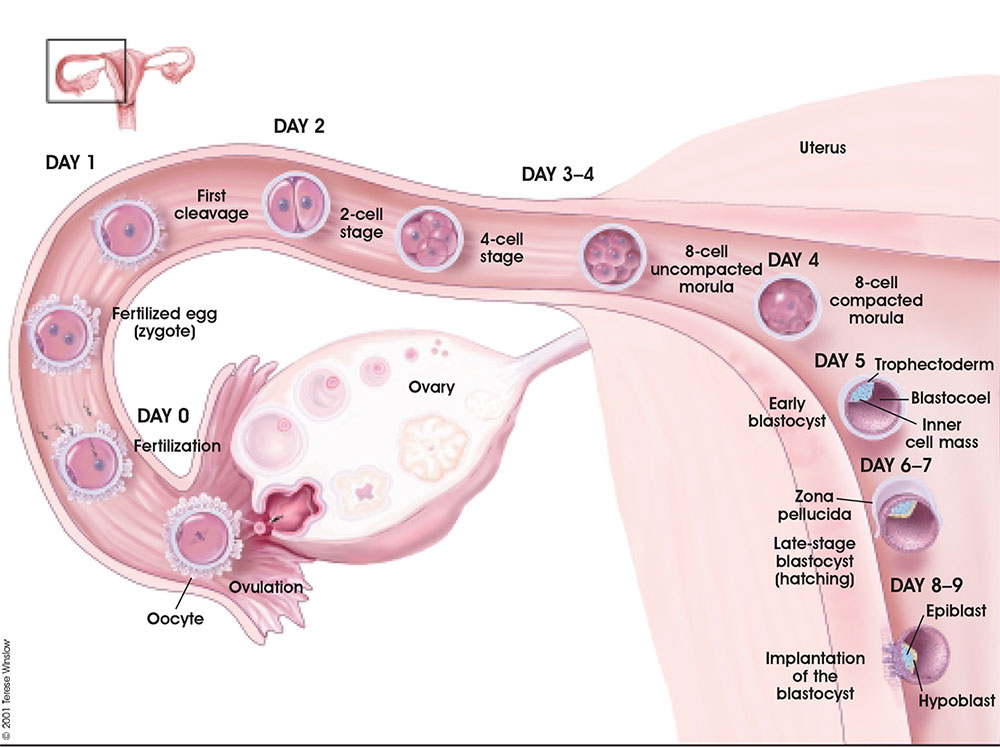 Seven days after leaving the ovary, the collection of cells that is called the blastula / blastocyst arrives in the uterus where thenesting in the wall of the uterine cavity. Not all blastocysts manage to nest in the uterus (estimated at 1 in 10 to a maximum of 1 in 3) and are wiped out by the menstrual flow. Conception is completed only when the blastocyst manages to nestle in the endometrium.

Thanks to nesting the embryo that is forming can draw nourishment from the blood vessels of which these tissues are particularly rich. Thus the placenta also begins to form (initially it is called trophoblast) which will allow exchanges between the mother and the fetus throughout the pregnancy. If the endometrium (the inner lining of the uterus) is not rich enough in nutrients to maintain the pregnancy, miscarriage occurs which resembles a late and very heavy menstruation without your noticing (unless tested). of early pregnancy) to be expecting. Low-nourishing uterine lining is one of the most common causes of infertility.

In the fourth week, the cells begin to differentiate. A group becomes the amniotic sac where the embryo will grow first and then the fetus, one group specializes in yolk sac from which the corpuscular part of the blood (blood cells and platelets) will originate, while a third group, the trophoblast, becomes the placenta. Finally, other cells are the ones that will give rise to the baby. At this point, your period is late and you may be starting to think about expecting a baby. The time has come to carry out a pregnancy test to detect the presence of the beta hormone HCG.

The beta hormone HCG is produced by the trophoblast, and it is this hormone, together with the progesterone produced by the luteum, which allows to support pregnancy at least in the first few weeks by favoring the formation of the placenta and a whole series of effects that help to consolidate the gestation.

L’beta hormone HCG it keeps the corpus luteum in the ovary which in turn produces progesterone. Progesterone is essential in maintaining pregnancy as it reduces the activity of the smooth muscles of the uterus in order to avoid the arising of contractions that could cause a miscarriage. At the same time, however, there is also the (negative) effect on intestinal smooth muscle that it determines constipation, and on the bladder with the consequent feeling of always having to go to the bathroom.

L’beta hormone HCG grows progressively in the first weeks causing the classic annoyances such as nausea and vomiting which may be more less tolerated by expectant mothers.

As for the fetal size, around the fourth week the embryo measures about 2 millimeters. It has the shape of a small green bean which, however, already has a sketch of the brain and spinal column.

The delay of the cycle is the first true pregnancy symptom. However, you may notice the breasts are firmer and have the urge to urinate more often. Some also experience a strange metallic taste in their mouth.

The easiest way to tell if you are pregnant or not is to take a pregnancy test, which detects the presence of the beta hormone HCG. There are some early tests that are reliable as early as 4 days from the date of your period.

If positive, congratulations on expecting a baby!

If you haven’t done so yet start taking folic acid right away and have your doctor prescribe the appropriate blood tests. It is good to know immediately if you are receptive to some infections such as toxoplasmosis. In case it is necessary to adopt a proper diet avoiding certain foods.

Go back to the months of pregnancy