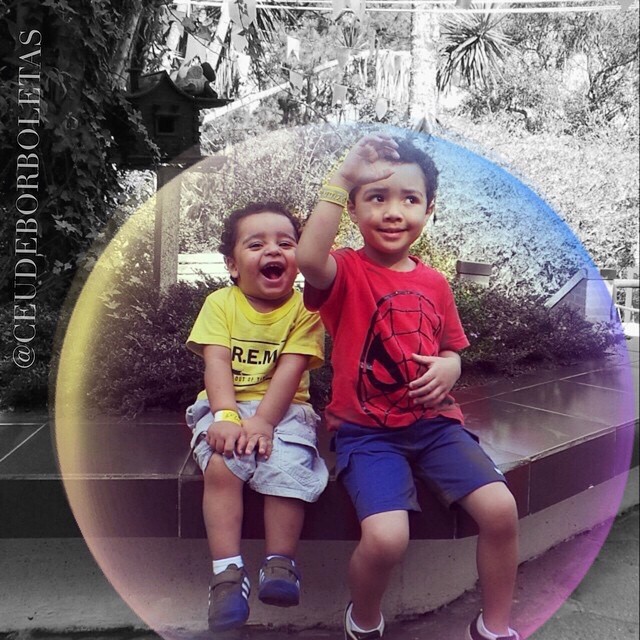 I know two boys
That in everything are different
If one says, “My nose hurts!”
the other says, “Oh, my teeth!”

live together
with so much contradiction.
When one says, “Oh, what heat!”
“How cold!” – says his brother.

But when the evening comes
with your past sweets,
ask their mother to tell them
Witches and Fairies stories.

And when sleep flies
about the finished day,
say “Good night, Mom!”
and fall asleep side by side.

Photo: My children in 2014 (Guilherme and Miguel)

Maria Alberta Menéres was born in Vila Nova de Gaia on August 25, 1930.
She has a degree in Historical-Philosophical Sciences from the Faculty of Letters of the University of Lisbon, and was a teacher of Technical, Preparatory and Secondary Education in the subjects of Portuguese Language and History (from 1965 to 1973).
He organized the Anthology of Portuguese Modern Poetry (1940/1967), in 1976, and, two years later, the Newest Anthology of Portuguese Modern Poetry, 2 volumes, by Moraes Editora, in partnership with the Poet E. M. de Melo e Castro.
From 1974 to 1986. she was Director of the Children and Youth Programs Department of Radiotelevisão Portuguesa, RTP, having been the author and producer of numerous television programs for children and young people, since at that time “those in charge also created”!
She was an adviser to the Ombudsman, from 1993 to 1998, and was responsible for the first support lines for children and the elderly in Portugal.

7 important reasons for parents to think

7 important reasons for parents to think