PCOS and pregnancy research: which therapies are effective?

The micropolicistic ovary syndrome (PCOS) is the most frequent chronic inflammatory disease of an endocrinological nature affecting about 12% of women of childbearing age.

This syndrome sometimes occurs extremely heterogeneous and already in 1934 it was described by Stein Leventhal as a pathology associated with: oligoamenorrhea, inferitility and hirsutism.

PCOS diagnosis: what are the symptoms?

The etiology is still controversial today. In 2003, one was held in Rotterdam consensus of the European and American scientific community of reproductive medicine who established it the diagnostic criteria. It can be said that the polycystic ovary is the manifestation of a complex functional alteration of the reproductive system given by the increase in male hormones (androgens), causing signs and symptoms such as:

It should also be emphasized that its name can be misleading since it is not true ovarian ‘cysts’ but rather follicles that remain more or less 10-12 mm in diameter.

Another fundamental notion to keep in mind is that this syndrome goes far beyond the boundaries of gynecology and tramples on common ground in endocrinology and more widely in internal medicine.

These alterations thus constitute a complex one dysmetabolic syndrome called, in fact, polycystic ovary syndrome, important for the implications it has on women’s health, both from an aesthetic, reproductive and metabolic point of view.

The most frequent endocrinological disorders include as already mentioned:

The most frequent metabolic disorders, on the other hand, are represented by:

Precisely in this regard, please note that 25 to 80% of these patients are overweight or obese (BMI> 25) as well as have a condition of hyperinisulinemia which leads to the accumulation of additional weight while having an apparently regular diet and thus feeding this vicious circle.

The clinical manifestation of PCOS is the result of a complex series of alterations of physiological mechanisms, so that this syndrome is not always fully expressed.

Therefore, diagnosis can be difficult, the doctor, suspected of PCOS, will be able to indicate specific tests for the diagnosis (hormonal tests, blood glucose, insulinemia, pelvic ultrasound etc.), recommend a targeted therapy, a correct lifestyle and weight loss. 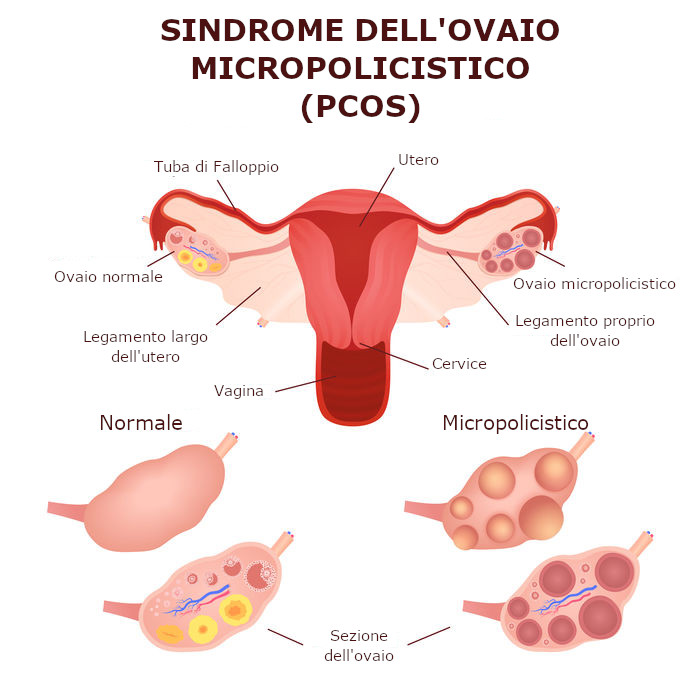 The therapies in case of PCOS

In light of the complex phenotypic combinations found in women with PCOS, the treatment of this syndrome requires a holistic, multidisciplinary and personalized approach.

This treatment involves symptomatic correction of the disorder for which the patient goes to the doctor. Therapy, therefore, can be aimed at correcting hirsutism, regulating menstrual cycles and inducing ovulation. in patients who want to become pregnant.

Furthermore, the treatment must be carried out at two levels. The first level is the preventive one; the second is the actual therapeutic one.

Prevention should be carried out especially in women who have risk factors for developing PCOS, or the presence of prepubertal hypertrichosis and / or premature pubarca, and overweight.

In these cases, the preventive activity consists in reducing caloric intake and increasing physical activity.

A low-fat diet should also be offered to those girls who, while not overweight, have a familiarity with PCOS.

Therefore in these patients the therapy is not only pharmacological, so much so that, for those women who have a BMI> 25 with menstrual cycle irregularities, it is sufficient to lose only 5% of their body weight to restore menstrual cyclicality in 30%. of cases.

If, on the other hand, the main objective to be achieved is the regularization of the menstrual cycle, the therapy consists of taking an estrogen-progestogen-based therapy (EP). This allows a regularization of the cycle which is, however, purely cosmetic and the benefits for the patient are exclusively psychological. It is, therefore, a symptomatic therapy that after the suspension involves the resumption of symptoms. If hirsutism is associated with the oligomenorrhoeic symptoms, it is possible to use PE therapy with a progestin that has a more or less important anti-andogenic activity depending on the degree of hirsutism, acne or seborrhea complained of by the patient.

Metformin for the treatment of PCOS

A new therapeutic perspective, validated in recent years, is provided by some oral hypoglycemic agents that would intervene positively, interrupting the pathogenetic connections between hyperinsulinemia and the hormonal and metabolic alterations found in PCOS. The data currently in the literature are conflicting.
There metformin the frequency of spontaneous ovulations seems to increase rapidly and independently of weight loss. Already in 2011 we published a study in the international scientific journal ‘Clinical Endocrinolgy’ which validated the long-term use of metformin in PCOS women, determining statistically significant improvements on glycometabolic, hepatic and hormonal parameters.

For women who do not find a full indication for the administration of insulin sensitizing drugs, various therapeutic approaches are currently under discussion (myo-inositol, or D-chiro-inositol), whose efficacy in terms of ovulation induction appears to be higher than placebo treatment but lower than treatments already approved by international guidelines.

In light of the metabolic and clinical benefits of these treatments, but given the low impact in terms of fertility and conception, the use of these drugs could be indicated in selected cases. only as an adjuvant in the context of a combined therapeutic approach not that personalized but above all indicated by the specialist gynecologist expert in this specific problem.

Elba Island, all the things to do and see with the family