My baby is breech. What is the external cephalic version (ECV)?

There are some techniques to make the fetus turn in the belly when it presents itself in the breech position (with the butt or the feet facing the uterus), one of these is the external cephalic version (ECV) or fetal turning maneuver.

Most breech babies it will naturally turn around 36 to 37 weeks of pregnancy so that the head is facing down in preparation for birth. About three or four children out of 100, however, remain breech. There are greater risks of complications during childbirth for babies who are in the breech position, for this reason, when the fetus is in this position at term of pregnancy, elective cesarean section is proposed.

To understand if a baby is in the breech position it would be appropriate, according to Tommy’s, to propose a screening ultrasound to all women at 36 weeks of pregnancy. In Italy we are going against the tide given that in the new LEAs a free ultrasound scan is not expected in the third trimester in the absence of problems even if, fortunately, gynecologists continue to recommend it, given its importance.

Why is it in the breech position?

There isn’t always a specific reason why the fetus presents breech, but there are some factors that make it more likely, such as:

What happens if the fetus is present in the breech position?

The breech position is common in the early stages of pregnancy. On the other hand, when the position is maintained even in the last stages, and ultrasonographically ascertained, a caesarean section is proposed, which is safer in this situation. However, the elective caesarean section carries specific risks for mother and baby, as well as negatively affecting her future reproductive life.

For this reason, we read in hospital information, many International Scientific Societies recommend offering the external cephalic version (ECV) to all women with an uncomplicated single pregnancy, with a fetus in breech presentation from 36 weeks and when not contraindicated, in order to be able to face labor with the fetus in cephalic presentation (i.e. upside down).

What is the external cephalic version?

This is a procedure to be performed in the hospital, to try to make the fetus turn in the belly.
An ECV can be performed by 36 weeks until early labor, as long as the waters have not yet ruptured. It is generally proposed at 37 weeks of gestation if it is the first pregnancy or at around 36 weeks if she has already given birth.

Before the maneuver, a blood sample is performed on the woman, an ultrasound is done to evaluate the amniotic fluid and the position of the placenta, and the operating room is set up as a precaution in case an emergency caesarean section is required.

A tocolytic drug (a muscle relaxant so that the uterus does not contract) is then given. Finally, during the maneuver the fetal well-being and the absence of contractions are monitored through cardiotocographic trace.

The procedure takes a few minutes, in semi-slack position and under ultrasound control.

The gynecologist presses specifically on the maternal abdomen in order to make the fetus perform a somersault.

The maneuver happened in about 50% of women. If successful, a caesarean section will be less likely to be needed, thus avoiding the risks.

The discharge is the same day after having checked all the parameters of fetal well-being.

In case of failure of the ECV maneuver, the elective caesarean section will be scheduled around the 39th week of gestation.

The hospital should be called if bleeding, abdominal pain, twitching or reduced movement occurs after an ECV.

When is ECV contraindicated?

The maneuver is contraindicated in case of:

What are the risks of an ECV?

ECV is not always successful and a second attempt may be proposed, depending on the circumstances.

Very rarely, the procedure may work at first but the baby returns to the breech position.

The safety of the cephalic version for external maneuvers is documented by 2 systematic reviewsis.

The ACOG also reports the following complications: rupture of membranes before delivery and preterm delivery.

What is the success rate?

It varies in the different cases from 30% to 80%. They influence the outcomes: ethnicity, parity, uterine tone, volume of amniotic fluid, podium engagement, use of tocolysis.

What happens if the baby doesn’t turn around?

After an ECV (or if you choose not to have one), if your baby does not turn upside down, you may be offered another ECV.

There are two other options for giving birth to your breech baby that your doctor and midwife will tell you about:

In both cases, the risks and benefits of each should be well explained by the medical team following the woman. .

Are there any other ways to spin a breech baby?

There are more or less documented tips and techniques. The main alternatives are the following. ‘

Some suggest putting yourself in the position in the following photo, every day, for 15-20 minutes.The goal is to get the baby out of the pelvis to give him more space to turn around. There is no research to support this method, but some moms have reported positive experiences.

If you feel pain or dizziness, you should stop this exercise immediately. 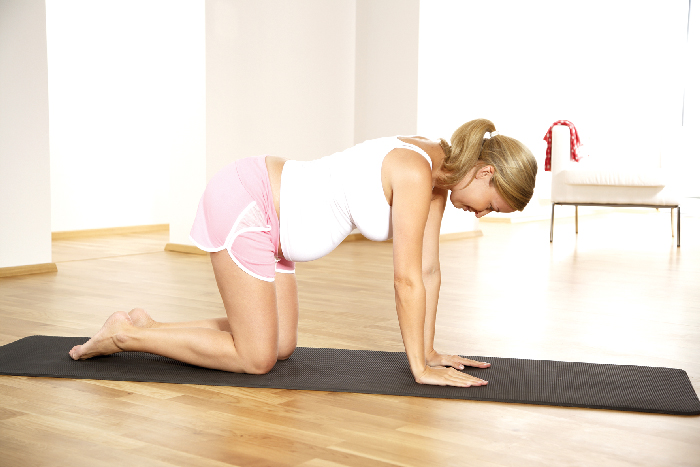 Another method concerns moxibustion, an unusual technique that derives from traditional Chinese medicine. A small number of clinical studies have shown that it worked in 50-80% of cases. It involves gently burning a “moxa stick” containing a soft and woolly Chinese herb called “mugwort”.

Moxibustion should only be performed under the direction of a qualified healthcare professional.

In any case, your doctor will explain the pros and cons of each technique and provide you with the risk and benefit assessments.

3 homemade tips to not dehydrate skin and hair in quarantine

Vaginismus and the desire for a child: a dysfunction to be treated

Vaginismus and the desire for a child: a dysfunction to be treated