When looking for a pregnancy, what matters is not only to feel good, and obviously be convinced (and agree above all) of what you are doing, but it is essential to have intercourse on the days when the woman is fertile.

Many women do not know when they ovulate or cannot detect the symptoms, others are extremely irregular and everything becomes more complicated.

If a woman has particularly irregular cycles, it is important that you talk to your gynecologist because irregular menstruation that skip months can indicate hormonal imbalances that could make the search for pregnancy more complicated. There are conditions such as polycystic ovary syndrome (PCOS) that result in irregular, non-ovulatory cycles, as well as increases in LH that make the use of ovulation tests unnecessary.

Here we will talk about the normal variations of the LH hormone during a menstrual cycle (remember that a menstrual cycle means that period between the start of menstruation and the day before the next). Therefore what I will explain below is not applicable in PCOS sufferers.

What is the LH surge?

Ovulation is a complex symphony of events that lead to the actual release of the egg from the ovary. Before the oocyte is released, there is an increase in the production of luteinizing hormone (LH) from being produced by the pituitary gland. This increase in the LH hormone is called the LH surge precisely because it begins to rise, peaks and falls within a few hours. Graphically, the trend of the levels of the hormone in circulation has a peak trend. 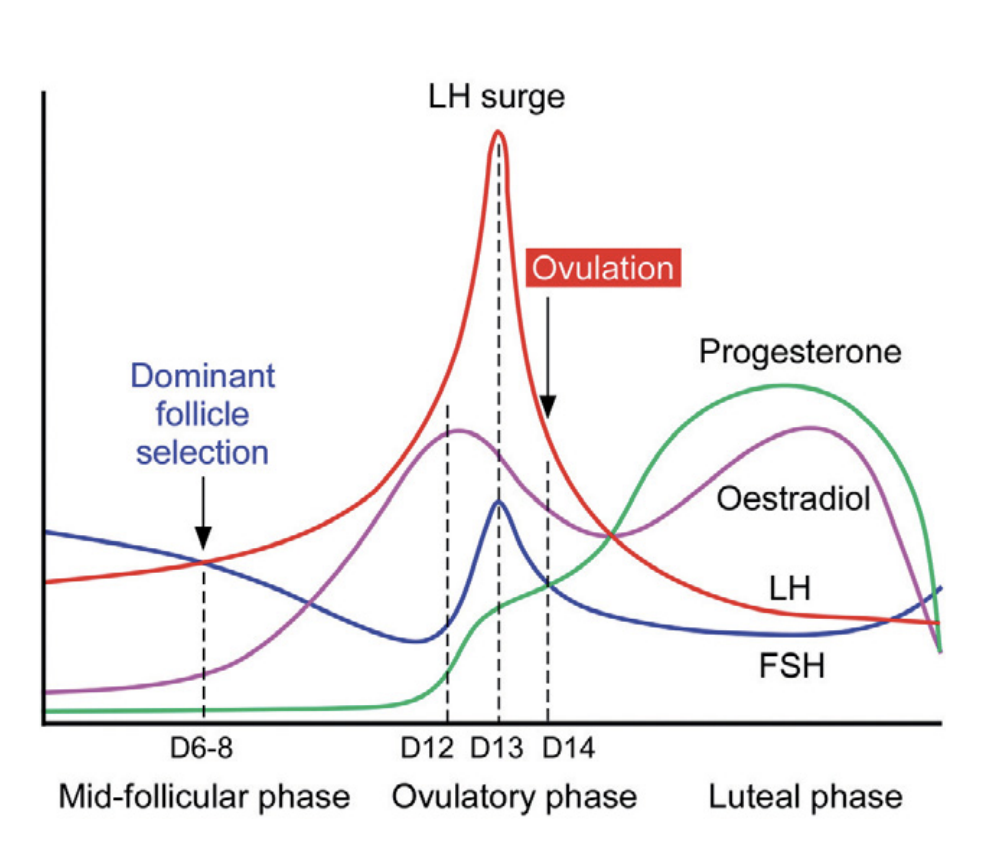 Usually the LH hormone is secreted at very low levels during the menstrual cycle.

But once the dominant follicle reaches a certain size, LH secretion increases to very high levels. This increase in the hormone is what triggers ovulation.

Finally, it is essential to understand that the detection of the LH surge in urine can be observed 3-6 hours after the increase in LH levels in the blood.

This is important because all that we detect in the ovulation test is the result of what happened 3-6 hours earlier in our body.

After the egg is released, the empty follicle is converted into a structure known as the corpus luteum, which begins secreting progesterone. Progesterone is a hormone needed to support a potential pregnancy.

If pregnancy does not occur, the corpus luteum shrivels, stopping the secretion of progesterone and triggering the start of a new menstrual cycle.

To identify exactly the moment of ovulation, you can combine the tests with the measurement of the basal temperature, which will register an increase due to the progesterone in circulation, from the day following ovulation.

Recall that the ovulation tests on the market are highly sensitive and detect concentrations starting from 20 mIU / ml, while the natural concentration of LH in the urine at the peak varies from 20 to 100 mIU / ml.

When does the increase in the LH hormone occur?

The day of the LH surge can vary from cycle to cycle in all women, so at the beginning of each menstrual cycle it is NEVER possible to predict with absolute certainty when you will ovulate. For this it is important not to rely only on calculations but to learn to observe the symptoms (or use ovulation tests or monitor the basal temperature). In women with shorter or longer cycles, the LH surge can occur before 12pm or after 16pm.

The LH surge may not be seen in every cycle. If you have problems detecting the peak with the tests, or you have very irregular or long cycles, you can ask the gynecologist to perform some blood tests (hormonal tests are performed between the second and fourth day of menstruation). These tests can be interpreted correctly by the gynecologist, or by an endocrinologist, specialists in infertility.

Ovulation can also be monitored through a transvaginal ultrasound performed at set time intervals. This allows the doctor to observe the ovaries and see how the follicles grow. These are ultrasound follicular monitoring to follow ovulation.

How do you identify the LH surge with ovulation tests?

There are numerous types of ovulation tests, kits and monitors, to be used at home, to detect the presence of the LH hormone in the urine. There are also tests that detect two hormones, estrogen and the LH hormone. They are the Persona tests or the Purple Clearblue tests, with a double hormonal indicator.

These last two two-hormone tests should not be read like normal ovulation tests.

The tests are performed every day starting from a precise moment that depends on the typical length of your menstrual cycles (here the table). When the LH surge occurs, you will see a color change on the test strip or monitor.

Tests that read LH hormone are positive when the two lines (control line and hormone line) are the same. Persona tests or Purple Clearblue Dual Hormone Indicators are usually read through the supplied monitor.

For best success in detecting the LH surge, it is important to test at about the same time each day and to reduce fluid intake in the 2-4 hours prior to the test (drinking large amounts of fluids before testing can dilute the concentration of LH in the urine and make it difficult to detect the hormone).

Can spotting the peak improve the chances of pregnancy?

Once the egg is released from the ovary, it is fertile for only 12-24 hours, then degenerates. Sperm can survive in the woman’s reproductive tract for up to 3-5 days.

Since the rise in LH signals that ovulation will occur within 35-44 hours, detecting the LH surge can help determine the most fertile period in a woman’s menstrual cycle. This will allow for better timing of intercourse for pregnancy research. I remember that intercourse every other day is sufficient in the period from 4-5 days preceding ovulation, and the day following ovulation.

If you use ovulation tests just have intercourse every other day until two days have passed since the last positive test obtained.

Does the LH surge give me the confidence to ovulate?

There are some indications that the LH surge may not mean true ovulation. In an observational study of 43 women in which urinary LH was recorded and analyzed daily, it was found that the LH peaks are not of a single type and are extremely variable. The onset of urinary LH surge was classified into two types:

Additionally, two women (4.3%) showed an LH surge without ovulation. In infertile women, a premature LH surge that did not trigger ovulation was detected in 46.8% of cycles. In addition, a situation defined as “unruptured luteinized follicle syndrome” (LUF) has been reported in 10.7% of menstrual cycles in normally fertile women. Women with this syndrome have a normal LH surge, a functioning corpus luteum and menstruation, but no eggs are released.

Very detailed studies have confirmed the diversity of LH peaks in terms of configuration, amplitude and duration. This diversity should be taken into consideration as it would likely benefit the treatment of the hormonal causes of infertility.
In particular, it was found that two features of the LH surge were associated with the ovulation process: multiple LH surges were associated with smaller preovulatory follicles; and prolonged LH surges for more than 3 days after ovulation were associated with delayed luteinization. Multiple spikes could be a symptom of follicular insufficiency and a prolonged LH surge could be a sign of luteal insufficiency. These assumptions should certainly motivate further research.

Jellyfish and children: what to do in case of a “sting”

Fertile period to get pregnant: symptoms and ovulation

Fertile period to get pregnant: symptoms and ovulation