how many months do they grow up? Teething scheme

The milk teeth represent an important moment of growth: the first tooth it is one of those stages that is photographed and noted well in the child’s diary.

When a tooth comes to light it can do so painlessly, in the sense that it does not cause particular discomfort, or it can cause some discomfort and children can be annoyed. Crying, restlessness, agitation, nocturnal awakenings caused by the pain / discomfort of the teeth that are about to appear, are typical disorders of this phase.

Many times mothers tell that the appearance of a new tooth is accompanied by a series of ailments that remain well etched in the memory: colds, small fevers, crying and diarrhea. Pediatricians give conflicting opinions in this regard.

There are those who declare in a peremptory way that there is no link between teeth that sprout and ailments of this type and those who instead associate them without any doubt. The reference in case of abnormal symptoms must always be the pediatrician.

Teeth, fever and discomfort: is there a correlation?

During the teething period babies have a tremendous need to bite into whatever comes their way. Make sure that children can bite on objects safe.

Biting helps them relieve itchy gums and help the teeth come out. The harder the object the better. Also always check the quality of the objects to bite that you offer the child to relieve the discomfort.

When do the teeth appear? The scheme of teething

The first sketches of what will be the milk teeth appear already around the sixth week of pregnancy. Permanent teeth also begin to form during the fetal period. Wisdom teeth, on the other hand, are formed only in the third year of life.

When do milk teeth appear? The timing varies greatly from child to child.

The first tooth that emerges is usually a lower central incisor, at around 6 months, and the milk teething completes around the age of 2 and a half.

At around 7-8 months, babies are able to chew and it is good to help them indulge this desire by making them gnaw on suitable foods, such as an apple, always making sure that they do not tear off too large pieces.

On the other hand, sugar, pink honey, various biscuits and anything that contains sugar are prohibited as it increases the risk of developing tooth decay. 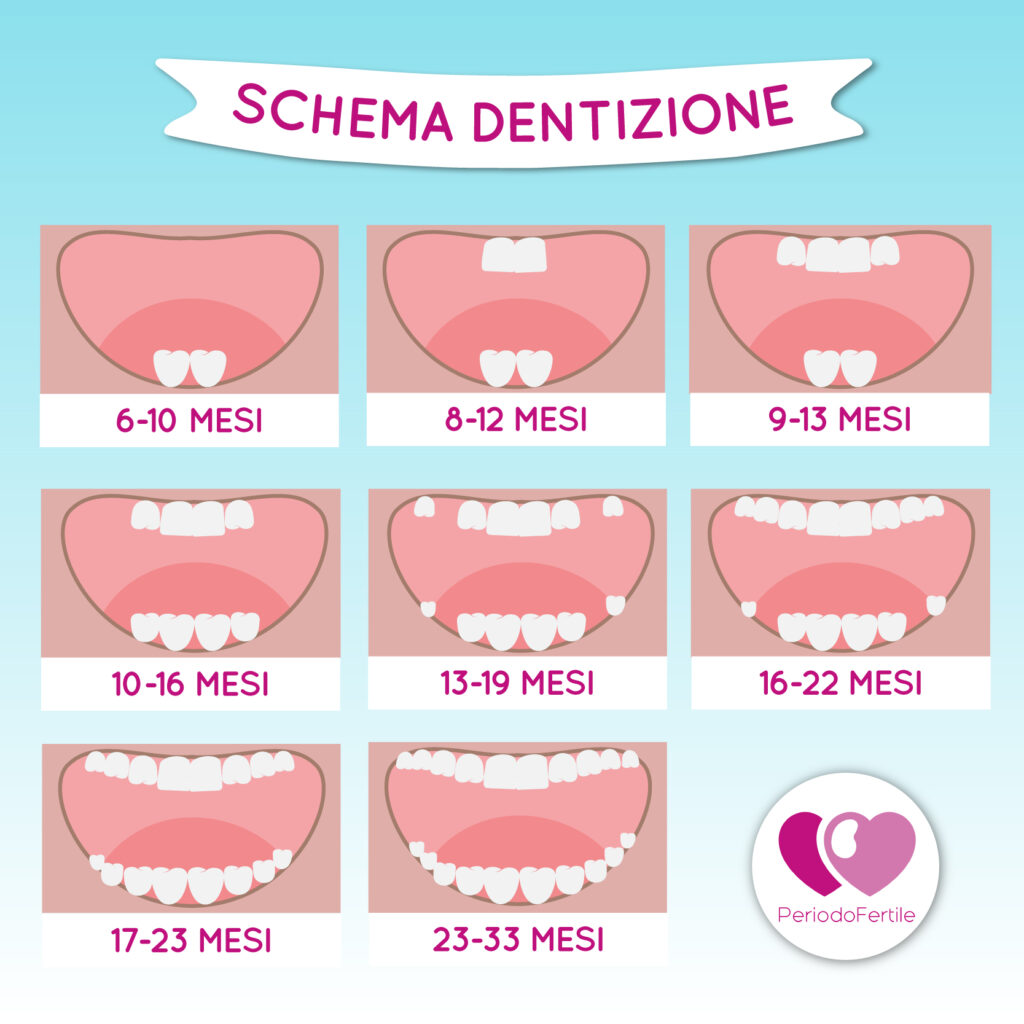 When will the baby teeth fall out?

All the teeth from the milk will fall out between 6 and 14 years of age and will be replaced by permanent teeth.

Towards the age of 6-7, the so-called “sixths” will also appear, ie i first 4 permanent molars which will no longer be replaced.

Generally, once these 4 molars have been erupted, dentists recommend doing them sealing in order to avoid the formation of caries.

What if no teeth have appeared at one year?

Although usually the first tooth appears around 6 months of life, there is no fixed rule on timing.

The little girls I am more precocious of males. Furthermore, teething times are hereditary and therefore depend on genetic factors. For the same reason, the predetermined pattern is not always followed (first the lower central incisors and so on).

The child in his family, a practical guide for new parents – Italian Society of Preventive and Social Pediatrics.

Ireland, 5 places to see with children

Measure your basal temperature for having a baby

Measure your basal temperature for having a baby