How can we understand childish tantrum? Educational Psychologist and Child Psychotherapist Isabelle Filliozat brings us some important information to better understand the tantrums and the guidelines for working concretely, according to the age of the child, and to overcome without difficulty this difficult period of child behavior between 1 and 5 years of age.

What are the most common behavioural problems of children today?

The proliferation of screens, electronic objects and also the enormous offer in supermarkets of toys, sweets, cakes and beverages, puts the child in a world that costs him to manage. So they have exploded more often than their children before. Hyperactivity and attention deficit are the evils of today’s society. On the one hand, children have fewer opportunities to run and relax. On the other hand, adults instill in them new cultures and in addition they consume more sugars, gluten, colourings and food additives than 20 years ago.

Can a tantrum or a crisis be considered normal in young children?

Yes and no. Some crises are inevitable and others avoidable. It is normal to cry when you are hungry, but do not let the child get hungry, we will feed him! A tantrum is normal in a child who still can’t speak when we don’t understand his need, and he sees that we try to contradict him. It is natural, when a two-year-old child is so anxious to get things right, and realizes that he still can’t do it, for example, when he drops the cube tower, when he can’t ride his bike, etc.

Then the parents’ attitude must be:

The most common fears in adolescence

At what age do childish tantrums appear and why?

What is the cause of the childish tantrum?

A need, an overload of stimulants (too much noise, too many decisions to make, too many colors, shapes or too many people … a train, a station or a supermarket …), lack of information (I still do not know that it is not written on the walls), parental attitude that puts the child in an impossible situation of double boredom (the father gives an order, “put your shoes on”, the two-year-old boy does not want to put his shoes on until he feels like it).

Can you set a time limit for the duration of a tantrum?

Yes, a tantrum is a stress discharge situation, which lasts only a few minutes. If it’s repressed by parents, it can last longer. 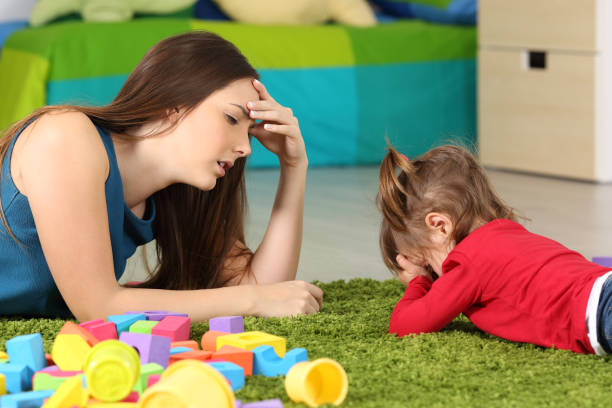 At the time, are parents guilty of their children’s annoying behavior?

Parents are no more to blame than their children. It is not a question of guilt, but of understanding the needs of children, their motivations for acting like them. Children need help and support from their parents to mature.

10 Phrases for children who need to be said

How should parents react to their children’s tantrums?

When the father identifies that it is a problem of stimulus overload in the brain, he can take his child and invite him to shout and debate. Then this period is very short, the child cries, his body is very tense, then relax, drop some tears are not of sadness, but a manifestation of the return, calm the body . And it all ends with a hug. When the tantrum is linked to frustration, the parents can recognize that it is not good to live this frustration without judging the child, the goal is to say words to the child so that it can express its feelings.

I confess I’ve been going through some situations here with Laura, at home. I say we pay language, don’t we?! But I try to talk to her and explain the situation, after all she understands things.

And back at your house, have you ever had a tantrum? Leave us your comment telling us about your experience.

Are you sure it’s queloid? High scar may be another problem

4 commandments to have healthy feet

4 commandments to have healthy feet