Long were valid classic German girl names like Therese or Margerete, Maria or Anna as “out of fashion”. That’s only called grandmas. But the beautiful first names for girls have long since made it back into the top name lists for girls and are socially acceptable. If you are also looking for a German first name for your girl, be sure to check out my list below.

When choosing a name, note that the first name immediately evokes associations

All maiden names and children’s first names inevitably set chains of associations in motion and prompt people to speculate about a person’s supposed social origin, their biological age and their level of education. Scientific studies show that the personal first name shapes the entire life, has the potential to activate prejudices and, in extreme cases, can negatively influence professional career. A typical “stigmatized” first name in German is, for example, “Chantal”. Because this first name was popular for a time with members of a certain social class and region, it inevitably evokes the association of low social origins and low educational standards.

At the same time, the name favors interactions between first name and personality. This means that someone with a stigmatized name will inevitably adapt to the existing prejudices also in his personality traits.

The other way around, there are also girls’ names that are associated with positive character traits and a good home – and children naturally grow into this cliché too.

Therefore, when looking for a suitable baby name, you should consciously focus on non-stigmatized and, of course, beautiful and beautiful girl first names that evoke positive associations.

Female first names from Germany and their advantages

Classic German girls’ names are basically never stigmatized and can therefore undermine prejudices. A conscious selection of German first names thus invalidates the first name as an education-specific marker. With a clever choice, the first name can even evoke positive associations for your girl. It has been scientifically proven that such names can, for example, increase the chance of a high professional position or a promotion.

You can also use the name ranking 2019 as a valuable source of inspiration when making a specific selection. In this way you can assess whether you are currently in the process of assigning a total or future trend name – or whether you are still quite individual in your selection.

Do you know any other German girl names? Be sure to write me a comment about which female first name is still missing from the list!

Your suggestions from the comments:

First names like Sophie, Emma, ​​Anna, Charlotte, Emilia or Clare have been fashionable again for years and, because of their pleasant phonetics, belong to the category of timeless, elegant first names, which, according to representative surveys, are exclusively associated with positive associations such as motivation, friendliness and intelligence.

The same prejudice applies to names that end in the consonant ”y”. A negative example of this are the nicknames Cindy and Mandy.

The one from the Old High German name ” Irmin”Inspired maiden name Emma has been at the top of the list since the end of the 19th century most popular German first names for female offspring.

The name Emma stands as a synonym for the all-encompassing or the over-looking and therefore combines a wonderful explanation of the name with a pleasant phonetic sound.

The German female first name has the same positive effect Anna out. As a modification of the biblical maiden name Hannah means Anna “The graceful” or “the gifted”.

According to Christian traditions Anna as the grandmother of Jesus Christ. Since 1900 the first name has been one of the classics of German first names.

Hip Hop icon Max Herre created a wonderful homage to the name Anna in 1997 with his hymn “ANNA”.

Anyone who gives their darling an Old High German name opts for an exclusive first name with a rarity value that sets the child apart from the crowd. One of the currently most popular Old High German first names is the maiden name Bele.

Based on these findings, concentrate on first names that are not based on fleeting fads, but are based on classic impulses. Girl names of religious origin that are inspired by old German usually also convey a timeless classic. 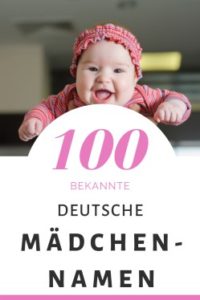 Is luna a cute name?