Technology for children? Yes, but the right one – Preschool

Nielsen research presented in Milan highlights how mothers are at the forefront of the use of technology. Mothers and children, even the youngest.
MOMS AND THE WEB

61% of mothers own a smart phone, 25% a tablet. The penetration of these devices among mothers is 1.2 and 1.5 times higher than that of women of the same age.

This is one of the first results that emerged from the Nielsen research conducted together with Our Son on over 2000 mothers aged between 25 and 44 years.

When asked about ‘what they could never give up’, the respondents in more than 50% of cases answered PCs or Smart Phones, while television is only in third place (almost 80% of mothers would give it up).
The phenomenon becomes clear if we deepen the use that mothers make of the web tool. They are connected on average three and a half hours a day using the web to optimize the time available: from e-commerce, to couponing sites, to online banking. The strategy is clear and has the dual objective of optimizing the family budget and the times of the day.

It almost seems therefore to be motherhood that pushes many women to use the web more and more. Browsing the web takes place both from a fixed PC and from a mobile (smart phone, tablet), but in reality these are two different types of navigation. While fixed time is characterized by a mother’s ‘dedicated’ time to deepen topics that interest her, in the case of furniture these are ‘cut out’ moments, to take advantage, for example, of waiting times in queues or traveling.

In the first place in the activities carried out there is the navigation on the sites for children (74%), followed immediately after by the activity on social networks (72%), the latter mainly via mobile and in any case in a significant percentage to share photos, videos and particular states related to their children. Mothers, in fact, do not seem very worried about privacy problems, given that only one in five declares themselves very much in agreement in considering social networks a renunciation of their privacy.

Although in this case as many as 80% fear that this use could be addictive.
In fact, while these devices increasingly play a ‘babysitter’ role that in recent times had belonged to the television, there is a concern that some activities may create a tendency to isolation or may be abused.

The problem, as with television, is solved by acting both on the amount of time allowed for children to enjoy and on the quality of the games.

JekoLab strives to respond to this problem, a company that, in collaboration with the Faculty of Communication Sciences of the University of Turin, develops apps for children with the mission of creating environments rich in stimuli and messages, with the right degree of interaction. but also of fun. The Apps are also studied in terms of colors used, image movements, characters’ language.

The latest addition is Talking Jeko, http://jekolab.com/talking-jeko/ a free parental control App already available on the App Store which, among other things, teaches children, with the help of parents, to manage the time they spend playing, through the use of coins that parents make available to children. 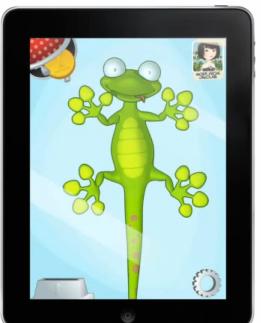 In short, a return to our childhood, when to play an electronic game, we first had to beg for hours our parents for a penny!

A fantastic journey through the funniest cartoons from around the world, to discover new languages ​​and distant cultures. This is the philosophy of ‘Planet Kids’, the new channel that will occupy position 620 of the Sky * bouquet, dedicated to children aged 6 to 10, and broadcast exclusively on the platform starting from 15 October. The schedule will offer a selection of the best animated series on the international market, always broadcast in two languages ​​(Italian and original language), as well as highly successful TV series for children, mini-courses on the most popular foreign languages ​​and news on the most interesting topics. for young viewers. The channel, produced by Verticon, will initially offer cartoons and programs in 7 languages ​​(Italian, English, French, German, Finnish, Hebrew and Chinese), which will increase in the future with the new programming. ‘With our editorial proposal, we intend to explain to children that linguistic and cultural diversity is a positive value’, explains the artistic director, Angelo Poggi, ‘and that this diversity can become an element of fun, knowledge and aggregation’.

The broadcasts of ‘Planet Kids’ will start on Monday 15 October, at 7 am, with the New Zealand series ‘The WotWots’, which tells (with a mixed technique of 3D animation and live footage) the adventures of two funny extraterrestrials discovering the extraordinary world of animals. This series will be available in Italian and English. Other highly successful animated series will follow, such as ‘School of Vampires’, ‘Red Caps’, ‘Carl Squared’ and ‘Inspector Gadget’. The TV series ‘Galis Summer Camp’ will also be broadcast, an exciting live action produced in Israel (broadcast in Italian and in Hebrew) about the fantastic adventure of three boys engaged in the search for a magical treasure in a forest. The ‘Kids News’ will also be launched soon, with news columns and reports on youth trends, animals, sport, music and much more.

Another great novelty of ‘Planet Kids is represented by language courses’ in pills’. The first will be ‘Let’s Go Hang’, a basic course of Mandarin Chinese with cartoons, which will allow Italian children to familiarize themselves with the elementary notions of this language. Other mini-courses in Arabic, Spanish and English will follow. ‘The goal is twofold and very important in an increasingly multicultural society like ours’, explains Angelo Poggi. ‘On the one hand, Italian children will be able to familiarize themselves with the most widespread foreign languages, following our mini-courses and also listening to cartoons in the original language. On the other hand, the many foreign children present in Italy will be able to see the animated series of their countries of origin also in their mother tongue. In short, it is a way to foster integration between different cultures, but also to allow children from other countries to maintain a bond with their origins’.

What are edgy names?

What are edgy names?