In recent times, various structures have arisen throughout Europe and Italy that offer Halotherapy, or the stay in a salt room for therapeutic purposes. 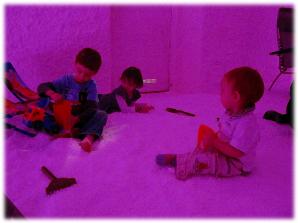 In many European countries such as Germany and Poland it is considered a real health therapy in the treatment of pathologies of the upper respiratory tract and in some cases also of skin diseases.

The beneficial properties of sea salt have been talked about since ancient times, among the peoples we can include the Greeks, Romans and Arabs, all overlooking the Mediterranean and have left us testimonies of seaside resorts born for curative purposes.
We have to get to about the middle of the nineteenth century but for a Polish doctor, Dr Feliks Boczkowsky, to write his observations about miners who worked in the salt mines and who did not have any pulmonary diseases, his successor established a health center. based on these observations.

A session in a salt cave is equivalent to a three-day stay in a seaside resort, the room is completely covered with salt from the ceiling to the floor. The treatment allows you to inhale microscopic particles of sodium chloride (1-5 microns in diameter), thanks to a microclimate that resembles that of a cave: in fact, the environment, in addition to being covered with salt, must have a humidity of 40 -60% and a stable temperature between 18 and 24 degrees. Furthermore, the salt must be natural and not chemically obtained.
An ideal environment for children as well, since a few months of life, children are the first to suffer from colds and respiratory problems which, in large part, disappear during the holidays by the sea.
The room is usually equipped with lights, which create an interesting chromatic play with the crystals, and with music which induce relaxation. Sessions in a salt cave also seem to induce a calming and relaxing effect against depression, bad mood and fatigue.
At some facilities it is also possible to see a movie or a cartoon and there are games to entertain the children. 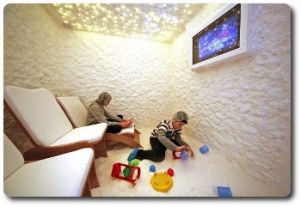 Dr. Umberto Solimene, associate professor of medical therapy and thermal medicine at the University of Milan, said that Halotherapy can be considered an anti-smog minicure that benefits adults and children, can improve sports performance and can benefit those suffering from respiratory problems such as rhinitis or sinusitis, and also seems to be effective in the treatment of multiple skin diseases.

Currently at the University Hospital of Bari an experiment is underway on the use of a particular room, called Aerosal, in which pathologies such as hypertrophy of adenoids and tonsils and related pathologies in pediatric age are treated. A study on the efficacy of Aerosal in patients suffering from psoriasis will soon be launched at the San Raffaele Institute in Milan.

There are some contraindications Halotherapy, is not recommended in case of infections with fever, hypertension, heart failure and more and it is therefore absolutely advisable to have a medical check-up before undergoing a therapeutic cycle.

However, not everyone has the same opinion on the salt caves, the allergy pediatricians gathered in the “Meeting on Pediatric Allergy” affirm that it is not a miracle cure, that there is no scientific evidence of the effective efficacy of these treatments and that children residing at the sea who obviously breathe saltiness all year round do not get sick less than their peers residing in the city.

In short, not all voices are unanimous in affirming that Hallotherapy is truly effective in the treatment or prevention of some diseases, but half an hour away from traffic, stress and smog probably won’t hurt.