Pregnant despite your period: is it possible?

Pregnant despite your period: is it possible?
🖥️

What you will find on this page:

Can I be pregnant if I am bleeding?

Pregnant despite the rule – does bleeding always mean that a pregnancy is ruled out?

First of all, it must be between the regular Menstruation and other types of bleeding, such as spotting during pregnancy, can be distinguished. Because when it comes to the regular menstrual bleeding in the menstrual cycle, you cannot be pregnant at the same time. The point of the menstrual period is precisely to reject the unfertilized egg cell, also known as the follicle, including the lining of the uterus, through the vagina.1 The pregnancy myth that you can be pregnant despite your period is and remains a myth.

So where does the myth that women can be pregnant despite their periods come from? There is bleeding that could indicate pregnancy. However, the different types of bleeding can often be distinguished from menstrual bleeding, also called days or periods, based on the duration and color of the discharge from the vagina. 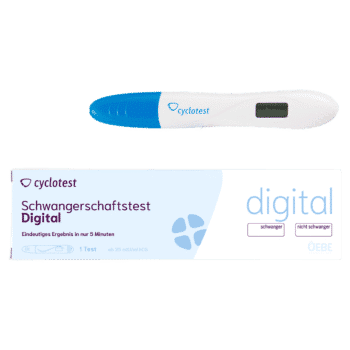 Pregnant despite your period? Here’s how to find out

Certain symptoms or monitoring your cycle can tell you whether you are pregnant despite your period.

What other symptoms indicate pregnancy?

If you have the suspicion that you are pregnant, you can of course check your suspicion with other symptoms. Signs of pregnancy, which can usually appear quickly, are for example:

However, these symptoms can also point to the approaching menstruation. Again, a pregnancy test provides you with security. This measures the pregnancy hormone hCG in the urine.

However, if you can determine a permanently increased basal temperature, then there is a high degree of certainty that the egg cell, the so-called follicle, has been fertilized. You can see this connection in the following graphic. If your basal temperature drops, you can assume that a new menstrual cycle will begin. If, on the other hand, the temperature remains permanently elevated, you can interpret this as a good sign of successful fertilization. Then the corpus luteum does not regress, it remains and continues to produce the corpus luteum hormone progesterone.

You can also see in the graph that a regular menstrual cycle begins not only with a drop in temperature, but also with your period. In the pregnancy cycle, bleeding can also occur at the same point in time, despite the prolonged elevation. In terms of strength and extent, however, it cannot be compared with menstruation. 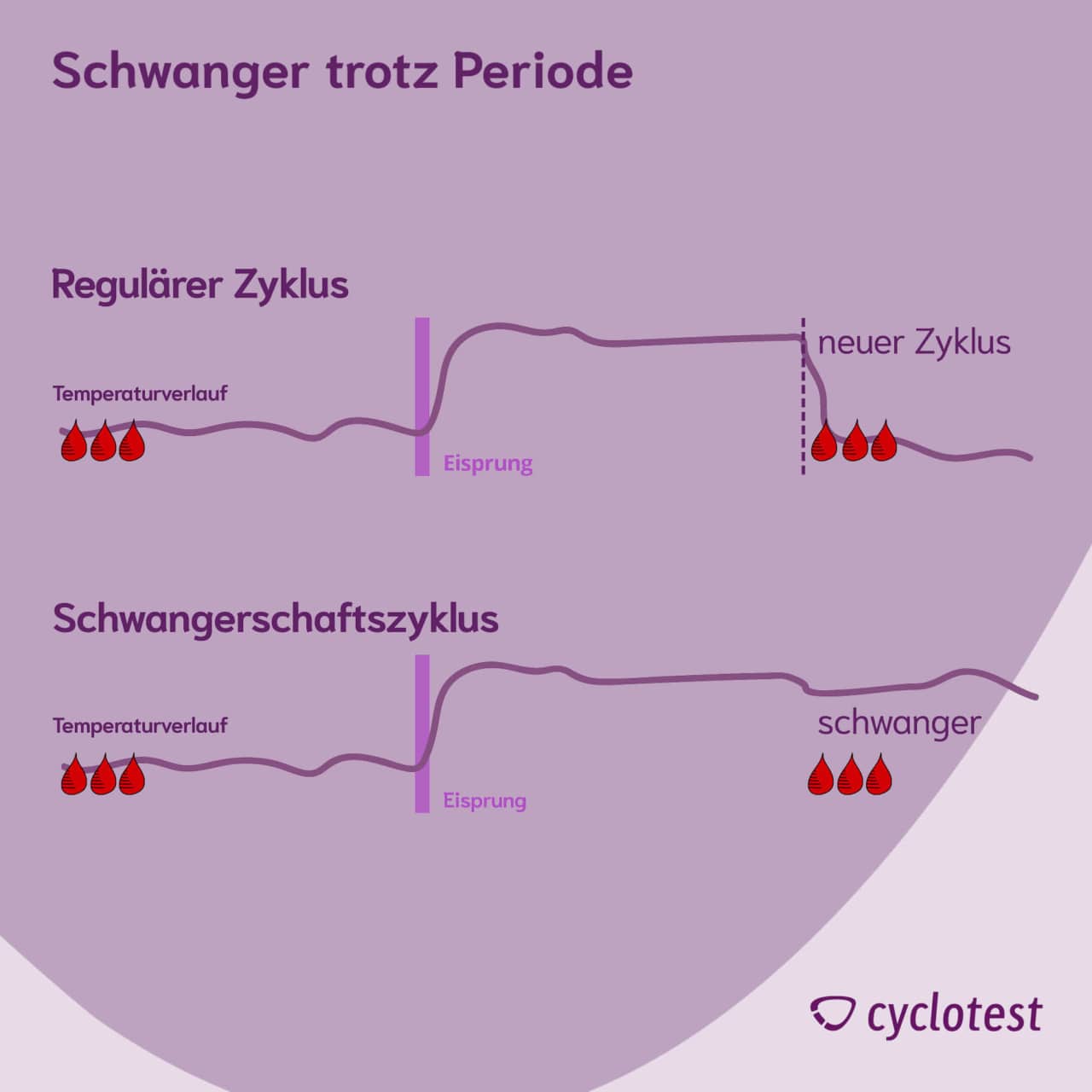 Missing your period is usually a very sure sign that the egg has been fertilized. Small bleeding may appear in early pregnancy. However, bleeding with a greater frequency and quantity is less common. The causes of this have not yet been clarified. If there is heavy bleeding, you should urgently consult your gynecologist and have the bleeding clarified.

Monitoring your cycle can provide important clues about pregnancy

If you are already fit in terms of cycle monitoring and periods, then you have probably already gathered a lot of knowledge about this. If you use the basal thermometer cyclotest mySense including the cycle app, you benefit from your individual cycle knowledge.

In addition, the cyclotest mySense app analyzes your cycle and determines when the ideal time is to have unprotected sex. Knowing this will help you get pregnant because it will prevent you from missing ovulation.

What is hormone-induced pregnancy bleeding?

Pregnancy bleeding can also be caused by changes in hormones, such as estrogen, progesterone and HcG, that come with the new physical circumstances. It can occur precisely cyclically in the early stages of pregnancy, which can be confused with the cyclical days of the period.

The same applies if hormonal contraception was used beforehand, as this often reduces the duration and intensity of the menstrual period. However, hormone-related pregnancy bleeding is significantly weaker than normal menstrual bleeding – the intensity ranges from a few drops to regular spotting.

Withdrawal bleeding during pregnancy despite the pill

Bleeding may occur even if you take the pill; in this case it is a withdrawal bleeding. It arises during your pill break, artificially triggered by the hormones progestin and estrogen, which are contained in the progestin-estrogen pill. The withdrawal bleeding can also occur if the pill is taken incorrectly or if it is forgotten – even if a pregnancy has occurred.

During pregnancy, the uterus receives a particularly large amount of blood. Occasionally, tissue from the cervical canal may continue to grow on the external cervix. Contact bleeding can therefore occur during or after sexual intercourse.3 Contact bleeding can also be triggered by gynecological examinations. 4

In the case of heavy, painful bleeding, the discharge of which is brownish and possibly smelly at the same time, the reasons may not be regular menstrual pain and you should definitely have your gynecologist clarified. He can then examine whether everything is okay and rule out a miscarriage.

The same applies to severe and unilateral abdominal pain. It must be clarified here whether it is an ectopic pregnancy, which, however, only occurs in rare cases.1 You can also use the cyclotest mySense cycle app to document your bleeding and any pain so that you can use the time after several cycles possibly see a recurring pattern.

Pregnant despite your period – is that possible?

So if you have bleeding, it is possible that you are pregnant – but not if it is your regular menstrual bleeding. You should now be able to distinguish the latter from other bleeding – because it is not possible to get pregnant despite your period. So you should have a certain amount of security, because especially in early pregnancy there can be more “red days”. Likewise, it can be too every now and then Spotting occurs during pregnancy.

If you want to have one hundred percent security for your baby wish, it is of course always advisable to consult your gynecologist. He will then be able to tell you whether you will be holding a baby in about 9 months. If it didn’t work out, our overview can help you with lots of information and tips on how to fulfill your desire to have children.

Contraception during your period

If you do not want to get pregnant on your period, you should use contraception in some cases. Because of the interplay between the lifespan of the sperm and an irregular cycle, conception may occur during your period. Simple ovulation calculators often do not include this interaction. If you want to calculate your fertile days, cyclotest mySense can help you.

If you are pregnant you will not have a period. However, bleeding can occur during pregnancy, but there are other causes. You can find out how to differentiate between bleeding here.

How severe can implantation bleeding be and what is it?

Implantation bleeding can occur when the fertilized egg cells implant in the wall of the uterus. It is often easier than normal bleeding. You can read about further phenomena here.

Why do some women have their periods despite being pregnant?

These women mistakenly mistake the bleeding for their period. A slight bleeding can occur, for example, due to the implantation. Learn more about it here.

Can I be pregnant despite my period?

No, once you’ve got your period, there is no way you could be pregnant. But you can have another type of bleeding, and it can have many causes. We have listed them all here

Is the withdrawal bleeding after stopping the pill a sign that you are not pregnant?

Since you can theoretically get pregnant immediately after stopping the pill, you should be sure that the bleeding is the withdrawal bleeding and not an implantation bleeding.

Thanks for visiting we hope our article Pregnant despite your period: is it possible?
, think about share the article on Facebook, instagram and e-mail with the hashtags ☑️ #Pregnant #period ☑️!

Week 2: An overview of the 2nd week of pregnancy