Placenta praevia is a misplacement of the mother cake. Normal birth is usually not possible. This complication of pregnancy increases the risk of bleeding in the third trimester and during and after delivery. 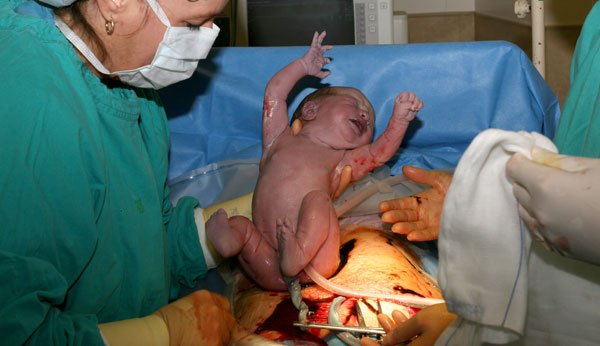 With a placenta praevia, a caesarean section usually has to be performed. Photo: AngelIce, iStock, Thinkstock

The placenta, also known as the placenta, is usually more in the upper part of the uterus. But with the Placenta previa (present placenta) the placenta lies unusually deep in the uterus – near the cervix, partially or even completely above it. There he blocks the birth canal for the baby.

Diagnosis is only possible in the second half of pregnancy. Because the uterus still grows considerably in the third trimester, which in about 80 percent of all cases in which the placenta is deep, still leads to a shift of the placenta into an uncritical position. At the time of birth, placenta previa occurs in around one in 250 pregnancies. As a rule of thumb, vaginal delivery is no longer possible if the placenta is closer than two centimeters to the cervix. In these cases, the baby is delivered by caesarean section.

Common causes of a low placenta are scarring of the uterine wall, which prevents the fertilized egg from implanting in the upper part of the uterus. Such scars can be the result of previous caesarean deliveries, scrapes, myoma removal or other surgical interventions. Previous inflammations of the uterine lining (endometritis) increase the risk of placenta misalignment, as does multiple previous pregnancies. Placenta previa is also more common after in vitro fertilization.

In the first half of pregnancy, the low position of the placenta means no risk for the mother or the unborn child. From about the fifth month, however, the pregnancy becomes a high-risk pregnancy. Physical protection and the renouncement of sexual intercourse are urgently necessary. Vaginal exams are no longer done so as not to injure the placenta. Pre-labor and stretching of the uterine wall and cervix in the final months of pregnancy put stress on the placenta. This can lead to their partial tearing off and more or less severe bleeding, which endangers the care of the unborn child and the general condition of the mother. The mother has to go to the hospital with every bleeding.

Heavy bleeding makes a rapid caesarean delivery necessary. If the unborn child is younger than 35 weeks, if there is still time, drug treatment with injections to accelerate lung maturation is carried out beforehand. Even if there are no complications, if the birth canal is blocked by the placenta, the caesarean section is scheduled as early as the 36th or 37th week of pregnancy in order to anticipate labor. Possible complications for the baby result from the premature birth: a low birth weight and immature organs make care on a premature baby ward necessary.

The risk of bleeding is also increased during and after delivery. The lower part of the uterus contracts slowly again, so the large wound left by the deep placenta can bleed long and profusely. In the case of placenta accreta, a particularly deeply ingrown placenta, only removal of the uterus can stop the bleeding. If there is placenta previa, delivery should take place in specialized clinics, where sufficient blood and blood substitutes are available around the clock and intensive medical care is possible for mother and child.

Placenta misalignments are more common in countries with a higher rate of caesarean sections. The increased risk of this pregnancy complication in subsequent pregnancies is one of the strongest arguments against the desired caesarean section.

Thanks for visiting we hope our article Often it is not possible without a caesarean section
, we invite you to share the article on Facebook, pinterest and e-mail with the hashtag ☑️ #caesarean #section ☑️!