My child has been coughing for weeks now, that’s not normal, is it?

My child has been coughing for weeks now, that’s not normal, is it? – Practice for children

THE saying of winter! Whether behind this question is the concern of the parents that their child might have a weak immune system, or whether they think that a more serious illness could be behind the cough – the cough is just really annoying. And maybe the pediatrician still has a magic potion that will stop the coughing.
So what is “normal”, how do you tell a cough from a cough, and when should you go for more detailed testing or treatment?

We would like to summarize some of the most interesting or important statements for you here.

It is also quite normal for children – especially in kindergarten age – to get one infection after the other. It is important to observe whether there has been an improvement in the meantime, perhaps even several days without coughing.

Cough can have many different causes. And so the sound of the cough and the way to treat the cough also differ.

So how do I know if my cough is “not normal”?

We’re using the word “normal” here because that’s how many parents use it.

In order to find the cause of the cough, the following questions are particularly important for us as paediatricians:

How long has your child been coughing and in what situations?

Does your child cough more at night or during the day?

If it’s a baby: from birth? For older children: for how many days/weeks?

How does the cough sound?

Cough may sound dry or wet/mucous. Sometimes coughing sounds barking or you can hear a squeaking/whistling noise.

More questions would be

If you are not quite sure, a cough diary is very helpful. Just write down for a few days when your child coughs, what the cough sounds like and what you notice. Such a diary – or sometimes a film recording of the cough – can be an advantage at the next examination.

As pediatricians, we ask questions like the ones listed above, and more depending on the situation. When we then listen to the airways during the physical examination, we pay attention to the following – roughly simplified:

It is then our task to distinguish whether it is – as in most cases – a simple viral infection or whether there is a disease behind it that requires special treatment or which requires further examinations.

You have to take a closer look or connect further investigations, for example

But again – for your peace of mind:

So much for “normal”.

Now, of course, the question arises.. What do we do with the cough now?

Answer: That depends on the cause.

Some causes require specific treatment, which we pediatricians will initiate.

As already mentioned, paediatricians are asked to answer these and all other special questions.

Now it’s about: What to do if we only have a simple viral infection? So a normal cold with a cough? (As in most cases…)

Then we don’t need drugs that expand the lungs, no cortisone and no antibiotics. Nevertheless, there are also plenty of other “cough syrups” that you can get prescribed, get in the pharmacy or mix together yourself. 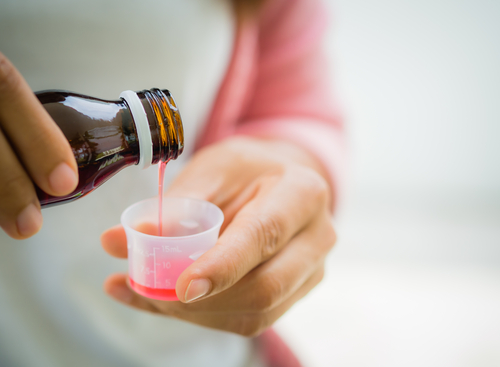 These drugs can be divided into so-called cough suppressants, expectorants and herbal and homeopathic drugs that are said to have a soothing, expectorant and/or positive effect on the immune system.

cough suppressant As the name suggests, they calm the cough. That means: the cough is suppressed. However, this usually does not make sense: the cough is an important protective reflex of the body and is there to remove from the lungs what does not belong there. Whether dirt or slime – it all has to come out. In exceptional cases, i.e. if the cough is severe (without a lot of mucus in the lungs that needs to be cleared) or your child has a painful cough that prevents your child – and you – from sleeping at night, a cough suppressant can help and rest are prescribed.

Caution: the use of very strong cough suppressants containing codeine is now banned in children under 12 years of age due to serious side effects (including fatal apnea). And so we would also advise against using these supplements in people over the age of 12. There are other cough suppressants without codeine, but they are also less effective.

expectorant should help to get rid of the mucus in the airways better. The question is how far this will succeed. There is no research that clearly shows rapid improvement. Some parents say that this has increased the mucus and they found it rather uncomfortable that their child had to cough even more. Others find that the thick mucus becomes looser and easier to cough up, which is more comfortable for them.

We think that you have to decide individually whether it is good for the child. We would only advise against giving the expectorant in the evening so that sleep is not disturbed by increased coughing. There is no recommendation for cough syrups.

at herbal and homeopathic preparations there are a wide variety of combinations and modes of action. Whether it’s to soothe irritation, expectorate or to support the body in dealing with the disease itself – the range is large. Preparations with thyme, primrose or ivy are mentioned in the medical recommendations for adults as a “possible therapy option”. Otherwise – for the friends of clear evidence, no “hard numbers” here either. But still: there is probably something to it.

Unfortunately, it’s simply the case that with many medicines for children (not just cough medicine) you always have to say: There is evidence that it works, but the “right” studies are still missing. Or: it has already been sufficiently tested in adults, but not in children.

Many who then try the appropriate remedies notice an improvement. Whether it’s just the pleasant feeling in your throat when you swallow the juice or the drops, or whether the placebo effect helps here, or whether we really recover faster from the medication, you can’t say in individual cases. Sure, because we don’t know what would have happened if we hadn’t taken them.

Which brings us to the category “Does well without anyone having (sufficiently) proven it”:

inhalations are good, especially if the nose/sinuses are also affected. Here’s a thing to note: if you want to inhale saline, for example, and you do that by heating salt water and inhaling the vapor, you’ll find most of the salt at the bottom of the pot afterwards. An inhalation device that atomizes droplets via ultrasound / compressor is better suited here. This is the most effective way of moistening the airways, mobilizing secretions and making it easier to cough up – but only as long as the child participates voluntarily and finds it comfortable. In no case should the child be forced.

Healing active ingredients can still be found in many plants that are used as home remedies such as onion juice or compresses with ginger flour or embrocations with lavender or other oils. The only question is: how should you dose self-mixed juices etc.? We think that you can’t go wrong with onion juice. But please be careful when rubbing essential oils in, as they can irritate your child’s respiratory tract even more, as well as the eyes and skin. Please only use oils for breast wraps from the pharmacy that are also approved for this application!

The classic is perhaps more beneficial: tea with honey (honey only from the first birthday!). Or sage candies (also not recommended for infants and small children…).

Most importantly, what good is it to us if our kids are rubbed and wrapped, swallowing, sucking, and inhaling all that stuff, but one parent smokes in the apartment? Nothing!

So: get some fresh air. The dry heating air in winter…

Thanks for visiting we hope our article My child has been coughing for weeks now, that’s not normal, is it? – Practice for children
, we invite you to share the article on Facebook, pinterest and e-mail with the hashtag ☑️ #child #coughing #weeks #normal #Practice #children ☑️!

What color is the name Jessica?