Inflammation of the breast outside the confinement period

Inflammation of the breast outside the confinement period

Inflammation of the breast outside the confinement period (Non-puerperal mastitis, MNP): Acute inflammation of the mammary glands, usually the result of other breast diseases such as mastopathy or macromastia, also occurring after taking certain medications (psychotropics or estrogen preparations) that stimulate milk secretion. About 90% of cases occur in women of sexual maturity, only 10% of cases affect women after menopause. In recent years, the incidence of MNP has increased sharply, meanwhile the proportion of all mastitis is about 50% (compared to 5-10% before). The reasons for this are not yet known.

This form of mastitis is rarer than puerperal mastitis.

mammary gland abscess: Encapsulated collection of pus in a breast cavity that has developed due to the melting down of inflamed breast tissue. An abscess occurs in almost 40% of all breast infections outside of breastfeeding and usually has to be treated surgically. 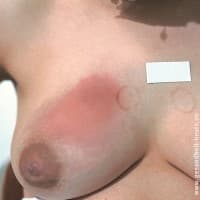 Inflammation of the breast in a 35-year-old woman who had been taking psychotropic drugs for six months. The right breast is painfully red and overheated. Here the gynecologist had to wait for the abscess to mature and then open the abscess so that the pus could drain out.
Georg Thieme Verlag, Stuttgart

When to the doctor

The next day if

Even outside of breastfeeding, hormonal imbalances and stress lead to milk being produced and secreted to the outside (galactorrhea). Accordingly, a blocked duct is often a breeding ground for the multiplication of germs and for the development of breast inflammation. The secretion from the nipple is not so much the cause but rather an expression of the disease.

A breast infection is also triggered when the nipple is pulled inward and a dimple is formed (inverted nipple or inverted nipple). Secretion collects in this dimple. Along with the germs present on the skin, an infection of the mammary gland develops.

The breast often becomes inflamed in the case of an immune deficiency, diabetes mellitus or rheumatoid arthritis.

There is also a risk of inflammation with nipple piercing. Poor hygiene, friction caused by clothing that is too tight or changing the ring before it has completely healed allows germs to get into the wound. These get into the milk ducts, causing breast inflammation.

Other risk factors are:

palpation. The diagnosis can be made on the basis of the symptoms and careful palpation of the overheated and very painful chest.

Ultrasonic. The doctor uses an ultrasound to rule out abscess formation.

mammography. Since the symptoms of breast inflammation are similar to those of breast cancer, the presence of a tumor must be ruled out. Mammography provides a reliable diagnosis.

Biopsy. If mammography is not sufficient to confirm the diagnosis, a biopsy is performed. This also clarifies whether the breast infection is a symptom of another underlying disease such as tuberculosis, syphilis or fungal infections.

Since milk secretion from the breast also occurs with breast inflammation outside of childbirth, treatment is given early with prolactin inhibitors that block milk secretion (e.g. Bromocriptin-ct®). It is important that the treatment lasts long enough, otherwise the symptoms will return quickly or the inflamed tissue will melt into an abscess.

If bacteria are proven to be the cause of the breast infection, antibiotic treatment is given, for example with flucloxacillin, cephalosporin or oxacillin. If it is an abacterial breast infection, the therapy consists of prolactin inhibitors.

If an abscess already exists, it is brought to maturity with heat applications (red light or short wave). The doctor then cuts into the abscess under short-term anesthesia and drains the purulent liquid through a drain. In addition, it is treated with antibiotics. This procedure can be performed on an outpatient basis.

The prognosis is good if the causes of the mastitis can be found and treated, otherwise recurrences are common.

What you can do yourself

In addition to individually tailored acute remedies, homeopathy recommends arnica and complex remedies (e.g. Naranotox plus®), which are said to have an anti-inflammatory effect. If the symptoms do not improve within twelve hours, a doctor should be consulted.

Thanks for visiting we hope our article Inflammation of the breast outside the confinement period
, we invite you to share the article on Facebook, instagram and e-mail with the hashtags ☑️ #Inflammation #breast #confinement #period ☑️!

These names are really allowed

These names are really allowed