The baby in the 7th week of pregnancy

The embryo moves for the first time

In the 7th week of pregnancy, the length of the embryo is given for the first time in the crown-rump length. This week it is about five millimeters, from now on the embryo will grow about one millimeter per day.

In the course of the 7th SSW, the baby forms the first muscle strands and moves independently for the first time, which at first seems more like a twitch. Over the next few months, it will learn to coordinate its movements better and better, and to do this it will undergo intensive training well into the third trimester of pregnancy.

The heart of the child pumps blood and oxygen to all parts of the body at around 150 beats per minute. The rudiments of the brain, eyes and nostrils, and extremities are now clearly visible.

In the 7th week of pregnancy, the body is already through the Spine stabilized. That too Nervous system of the child continue to develop. Two outgrowths between the heart sac and the mouth opening are initially reminiscent of the gills of a fish, from which the face, neck and lower jaw will later form.

In the 7th week of pregnancy, the mother-to-be will feel the effects of progesterone often tired feel. However, she may have trouble sleeping due to ligament strains, frequent urination, and nighttime cravings.

Due to the hormonal changes and the constantly increasing blood volume caused by pregnancy, circulatory problems – for example high or low blood pressure.

The baby in the 8th week of pregnancy

In the 8th week of pregnancy, the body of the embryo measures about 15 millimeters. Up until the beginning of this week, he looked little different from the embryos of other mammals, by the end of which he will have clearly assumed human traits. In the ultrasound image, the approaches of the fingers and toes visible. The skull is made of transparent cartilage through which the brain structures can be seen.

In the 8th week of pregnancy, these consist of several bubbles, from which the various brain regions will develop over the next few weeks. There is fine skin over the eyes as a lid area, and there are also areas for the lips and tongue. In the 8th week of pregnancy, the cartilage begins to ossify. Elbows and knees form on the extremities – the embryo will soon begin to develop its arms and legs to move.

During this week, the baby raises its head for the first time, the small body stretches through the new position. Lots internal organs – for example kidneys and stomach – are already present and active. In the next four weeks of pregnancy, all other organs will also form.

Ups and downs with the expectant mother

From the 8th week of pregnancy, many pregnant women suffer from increased fatigue as well as the well-known ones morning sickness. They often feel short of breath and exhausted even with little exertion: part of the inhaled oxygen now benefits the embryo, which the mother feels as a slight lack of oxygen.

Oftentimes, the pregnancy hormones whirl those as well psyche of pregnant women thoroughly confused. By the beginning of the fourth month of pregnancy, many of these symptoms will subside. 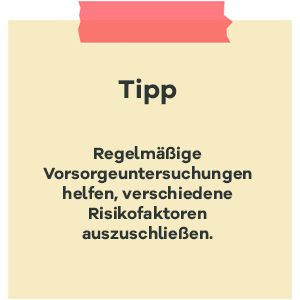 As soon as possible after becoming aware of the pregnancy or suspecting it, the pregnant woman should gynecologist or consult your midwife for the initial examination.

These include one detailed medical history to determine previous illnesses and family or social stress factors, including a general and a gynecological examination Ultrasonic. In addition, the blood and urine values ​​​​are determined and the expectant mother is tested for any existing Rhesus intolerance.

Unless the pregnancy is a high-risk pregnancy, these are scheduled at monthly intervals up to the 32nd week of pregnancy, and then at 14-day intervals. Irrespective of the initial examination, an ultrasound examination of the baby is also planned for each trimester.

Do we make the calendar? – Preschool age