Weaning, the 15 things to know

From when you start what self-weaning is, from which milk is preferable in the first year of life to how to regulate oneself with proteins and more: all the main indications on starting the baby’s complementary feeding

The weaning period has arrived! Here are all the main indications on starting the baby’s complementary feeding: from when does self-weaning begin, from which milk is preferable in the first year of life to how to regulate oneself with proteins and more.

1. Weaning: when it starts

For the World Health Organization, the introduction of complementary foods to milk it should not take place before the sixth month, and various international companies and agencies are on the same line. The European Society of Pediatric Gastroenterology, Hepatology and Nutrition (ESPHGAN) and the European Food Safety Agency (EFSA), for example, recognize six months as an ideal time for the introduction of other foods besides milk, however suggesting that stay in a window of four to six months. And also according to the Association of American Pediatricians, the baby should only drink milk for the first four to six months.

But be careful: these general indications cannot ignore the characteristics of the individual child. Pediatricians agree that to start weaning it is good to wait until the child himself on the one hand shows an interest in food (which can also happen early, between the fourth and fifth month of life) and on the other hand ready from a neuromotor point of view.

In short, the little one must know:

“Some babies may be ready a couple of weeks before they turn six months, others a few weeks later,” he said Ilaria Giulini Neri, nutrition pediatrician at the Melegnano Hospital and researcher of the Nutrimamma project of the Icans in Milan, during the live broadcast of nostrofiglio.it dedicated to weaning.

“Obviously – continues the specialist – there may be individual cases in which the pediatrician will recommend starting earlier (but in any case after the fourth month) the introduction of foods other than milk, for example if there are particular growth problems. in particular cases, the indication is to give milk – maternal or artificial – to the child up to approximately the sixth month “.

2. Weaning: because solid foods are introduced

The Ligurian pediatrician explains it well Alberto Ferrando in his book How to feed my son (Editions LSWR 2017): “The milk taken by the newborn it is no longer enough to completely satisfy its nutritional needs and, therefore, it is necessary to fill the iron deficiency, proteins, vitamins with foods that contain them. As far as iron is concerned, term babies who are exclusively breastfed usually maintain sufficient supplies of it for the first six months ”.

What if the breastfed baby at six months is not yet ready for complementary feeding? How to avoid the risk of iron deficiency? Some pediatricians advise to insist a little, while others tend to respect the child’s time anyway, offering rather an iron supplement.

According to the Pediatric Cultural Association’s point of view on complementary nutrition,

“If the mother did not suffer from nutritional problems during pregnancy and lactation and if the baby’s umbilical cord was closed (clamped) at birth when it stopped pulsing, no iron supplementation is necessary. In all other cases it is it is preferable to supplement the infant with iron-based medicines, rather than propose a complementary forced feeding ”

3. Complementary nutrition: what it means

It means that foods other than milk enrich a diet which, however, remains predominantly milky for the first time. “Little by little children they get used to new flavors and new textures, but at first they continue to get most of the nutrients they need from breast milk or formula “explains the pediatrician Franco De Luca, now a freelancer (formerly a community pediatrician in a Roman clinic), president of the Montessori Birth Center.

This implies that weaning must be considered as a slow and progressive phase: a series of small steps along which to accompany the baby patiently. 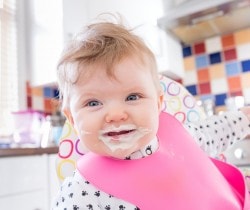 Worried from the start of weaning? Here are some tips to get you started on the right foot and better deal with the inevitable crises. Consulting by Silvia Scaglioni, …

4. No restrictions on foods considered allergenic

50 great first names from the north

Until recently it was thought that the best way to prevent the risk of food allergies in children was to delay as much as possible the introduction of potentially allergenic foods, such as fish, eggs, tomatoes, strawberries and dried fruit. Hence the compilation of rather strict weaning roadmaps.

For about twenty years now, however, the scientific studies available have led to questioning this belief and today the recommendations have radically changed. An article recently published by the American Association of Pediatricians in the journal Pediatrics recalled this:

Why do babies cry? – Nostrofiglio.it

Sweet childbirth, what it is and how it works

Sweet childbirth, what it is and how it works