Neonatal acne: remedies and how long it lasts

Neonatal acne: red or white pimples that appear on the face. It is a rather frequent condition, which tends to resolve itself

Neonatal acne? Well yes, i too babies can get acne. Let’s find out more about it among the remedies, how widespread it is and if it resolves itself.

It may seem strange, as we are used to associating acne with adolescence, but even babies can have it. It is about red or white pimples which typically appear on the cheeks, nose and forehead of the child (but they can appear anywhere on the face). 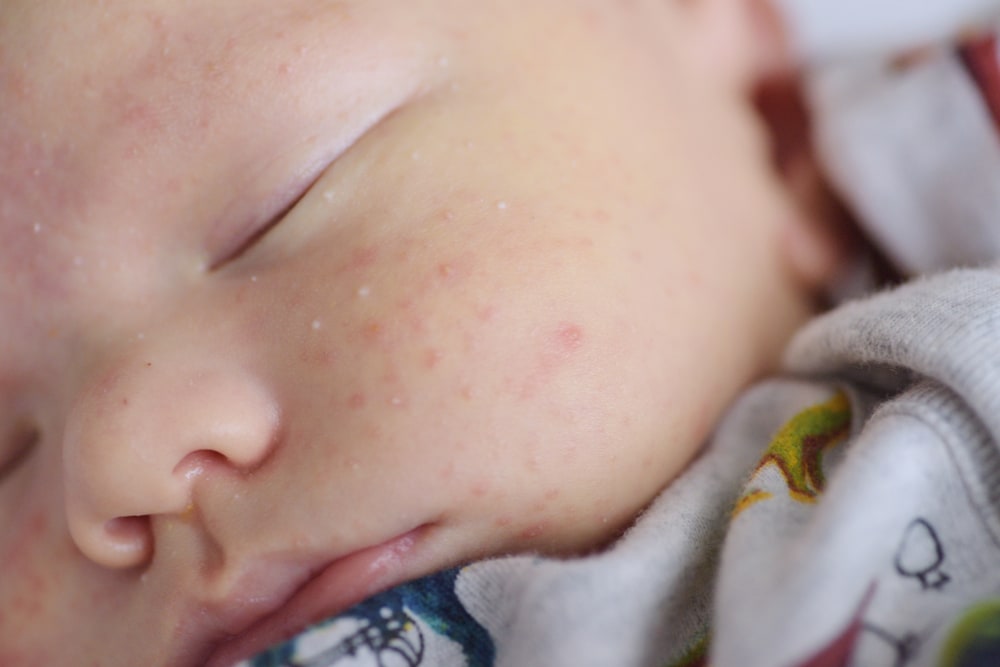 Babies can also suffer from acne. Typically, these are small boils, white or red, which appear mainly on the baby’s face. Don’t worry: the problem is solved …

Not only that: there are children who have neonatal acne on the head, neck, back and shoulders or chest. But let’s face it right away: it is a transient phenomenon, which typically lasts a few weeks and disappears on its own.

There is nothing to worry about.

Neonatal acne is a phenomenon quite common: according to data from the American Academy of Dermatology it affects indeed one in five children.

It typically develops around two weeks of life of the baby, but it can appear at any time before six weeks (if it appears after a month and a half, it is rather about childhood acne, which can last up to one year of life and sometimes even beyond). Some children present it instead already from birth.

It has not yet been definitively clarified what causes the onset of neonatal acne. However, it is believed that the following may be involved:

The power supply, on the other hand, is not connected in any way at this event.

Typically the situation it resolves itself within a few weeks or, at most, a few months, so generally nothing needs to be done. Here are the general recommendations from the American Academy of Dermatology:

At the slightest abnormality of the newborn’s skin, parents rightly worry and think that it may be for example eczema or atopic dermatitis, a chronic inflammatory skin disease that is actually quite frequent. However, there are significant differences from neonatal acne.

Atopic dermatitis, in fact, usually appears starting from five / six months of age (therefore later than in newborn acne) and manifests itself with roundish red and moist patches (exudants) located in particular on the face (with the exception of the area around the mouth, which tends to remain free) and on the limbs. Brownish-yellow flaking may also occur on the scalp and forehead.

Sources for this article

Is it possible that the newborn has acne?

Yes, but it is a transitory phenomenon, which usually lasts a few weeks and disappears on its own.

What to do if the newborn has acne?

Nothing. Better not to apply medicines. It is also advisable to wash the baby’s skin with warm (not hot) water and avoid products that are too fatty.

When does neonatal acne develop?

It develops around two weeks of a baby’s life, but can appear anytime before six weeks.

Change the report card in elementary school: the 4 levels of judgment