the Placental barrier separates the mother’s bloodstream from that of the child. Thanks to this fabric filter, both blood circuits work independently of one another.

What is the placental barrier? 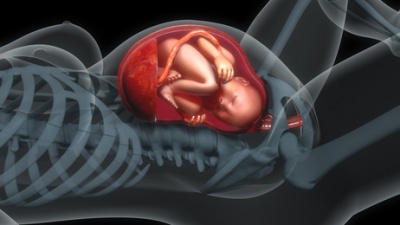 The placental barrier separates the mother’s blood from that of the child. Thanks to this fabric filter, both blood circuits work independently of one another.

As soon as a fertilized egg is implanted in the lining of the uterus, it is completely supplied by the maternal body. The egg cell’s energy reserves are now depleted and it depends on being kept alive by the lining of the uterus. From this mucous membrane, a placenta develops within a few weeks, which only sticks to one point of the uterus and remains connected to the child via the umbilical cord.

At first, the mother’s and child’s blood circulation is not yet separated – this only happens when a placental barrier forms. From a histological point of view, it consists of several layers and is a thin separating membrane that sits on the chorionic villi. This is where the exchange of substances between mother and child takes place, because the placental barrier is there to only allow those substances from the maternal into the fetal bloodstream that the child needs. These are, for example, oxygen or nutrients.

In the first days of life of the fertilized egg cell, it does not need any separation from the maternal body. Over time, however, the unborn child needs to have an independent blood circulation system, which is why this is one of the first functions the placenta develops.

The placental barrier serves both as protection and as a transport route. There are a number of transport mechanisms by which a substance is removed from the maternal Blood can reach the child, for example diffusion or pinocytosis. These are each intended for different substances that should get through the placental barrier to the child.

Diffusion, for example, is used to nourish the unborn baby. In this way it gets nutrients or oxygen from the maternal circulation. Pinocytosis, on the other hand, is intended to transfer IgG immune cells from the mother to the baby. In humans, these immune cells arise about 6 weeks after an infection has been overcome and ensure that they can no longer arise again as quickly. Since a baby will not be able to produce its own immune cells shortly after its birth, it will get exactly these long-acting immune cells from the mother. The baby can only be immune to diseases to which its mother is also immune. This protection from birth to the formation of an immune system of its own is called nest protection and, along with nutrition, it is one of the most important functions of the placental barrier.

You can find your medication here

In most cases, however, the placental barrier is so intact that a separation between maternal and child blood and the correct filtering of substances is ensured. After the birth or, in the worst case, even before the birth, placental abruption can occur, which is accompanied by severe Bleeding that causes the child to be born immediately. Depending on the child’s level of development, it is possible to save it. A rupture of the placenta poses a considerable risk for the mother due to the loss of blood. In this case, she needs medical help immediately – and a neonatologist is also crucial for a premature baby.

With perfectly healthy placenta formation, microtraumas of the placenta can always occur. This means that the placenta has suffered minimal damage, for example from incorrect movement, great physical strain or an unintentional impact against the abdomen in everyday life. The mother notices nothing of the microtrauma, but there is a small tear in the placental barrier and the child’s blood passes into the maternal circulation. This is relevant if the mother is Rhesus negative and the child is Rhesus positive. Your immune system will then begin to make antibodies against your baby’s Rh-positive blood.

The first baby to do this will be born completely healthy. Usually only the first pregnancy goes well. In a second pregnancy, when the child is Rh positive again, the mother’s immune system will react faster and begin to reject the child as the immune system recognizes it as an intruder. With the help of drugs that suppress these antigens in the maternal blood, it is still possible for the woman to become pregnant again by the same man and for the child to be born healthy. However, it must be recognized in good time that this particular case is present.

However, even a healthy placental barrier allows substances to pass through to the child that can harm them. We are talking about alcohol, components of cigarettes, drugs and some medications. This is why it is so important for pregnant women not to consume any of these substances and only take medication under the supervision of the doctor in order to prevent congenital harm to the child.

Thanks for visiting we hope our article Placental barrier – function, task & diseases
, we invite you to share the article on Facebook, instagram and whatsapp with the hashtag ☑️ #Placental #barrier #function #task #diseases ☑️!