How to explain the Constitution to children

How to explain the Constitution to children? Even the little ones must have the opportunity to access the founding text of our society

There Italian constitution it contains the fundamental principles of civil life in our country: for this reason it is important that even the little ones have the opportunity to read it, perhaps in a more accessible version.

This is the goal of Anna Sarfatti, author of the book of nursery rhymes “The Constitution told to children”, illustrated by Serena Riglietti and published by Mondadori.

“I noticed the great interest with which the children participated in the conversations they were about peace, justice, respect, freedom, rules“. Teacher for years of kindergarten and primary school, Sarfatti explains how to enthusiastically bring children closer to the Constitution and help them understand the guiding text of our society.

The illustrations by the Genoese painter and set designer, Luzzatti, make the text of the first twelve articles easily accessible to children, explained and adapted by a constitutionalist of rank like Valerio Onida and summarized in rhymes by the writer Roberto Piumini.

The comments are of course in Italian but the texts of the fundamental Charter are also translated into 12 languages, from Albanian, to Russian, to Arabic, to be read in our elementary schools by now splendid collections of rainbow children. 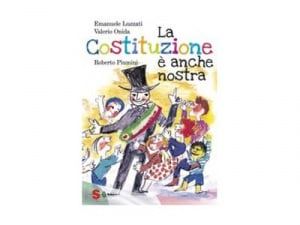 Here are some examples of how a legal text can be made easily understandable.

Piumini explains that the ancient Greek word represents a “everyone’s home: a big house, our house, not only mine, where everyone lives, but not alone, where you live in good company “. “Not a palace where the king commands, or a cave without a reason: but a house of people who choose between bad and good things. A big house where we talk to each other, open to new ideas and new friends, where you learn to become free, where you try to be happy“.

“The big house was built by men and women, slowly: it is not founded on some power, but on the work of all people.. “” Everyone has rights and duties, because there freedom is a job, a game together with others, not alone, a song that is sung all in chorus ”.

“People are different in language, in customs, faith, sex, convictions, but in the big house, all of them are the same, without distinction”….

“If there is someone who can’t make it, who has problems who is weak or isolated, the big house takes care of him, it helps him to improve his state”.

“The language of Italy is Italian, and the dialects, somewhat special languages, words of a place, living languages, are Italian but local languages”.

“And in the big house there is someone with a language that is not Italian, German or Albanian or French, Arabic or Chinese or Castilian. Languages ​​are all riches, they express, and expression is good: the big house welcomes and defends them, listens to them, understands them, maintains them “.

Piumini’s statement is marvelous when he reads the constitutional text, translating it freely as “There are schools, museums, libraries, theaters, courses, universities: the emptiness of the mind brings evil, and ignorance is not freedom“.

“Italy is beautiful, says the legend, but beauty is easily ruined: the big house must also provide for the beauty of the environment “.

“The big house has its doors open, and when people have entered it they treat it with justice and respect, as is customary to do civilly”. “But then there are those elsewhere who live badly, persecuted or without freedom: our big house welcomes them, offers them asylum and hospitality”. “Because the big house of those who are within its walls is also the home of those people who elsewhere have violence or fear“.

Christmas 2020, where to meet Santa Claus without leaving home

Weaning, advice for the day and for the night

Weaning, advice for the day and for the night