the First names in the Arab world are shaped by the Islamic faith. There are often differences in the spellings depending on the region.

The Arabic boy name Mohammed for examplel, which is the most frequently used worldwide, can also be used, for example, in the spellings Muhamed, Muhamed or Mohammad happen. This can vary depending on the country of origin. The name is so popular because it is a prophet from the Islamic faith. Translated it means something like “the praiseworthy”.

Compared to European names, which usually only consist of first and last names, Arabic names are significantly longer. Arabic female first names in many cases reflect a genealogy that has been handed down. This is an oral tradition to this day.

The passing on of names is often used, especially among the ethnic groups who do not have knowledge of writing. This is to prevent people from marrying who are too closely related to each other. By passing on the name, it is possible to read off the last five to six generations.

Passing on of names in the event of marriage and birth

In most Arab regions it is common for both spouses to keep their family names after marriage. This usually results in very long names, which are rather uncommon in European regions.

A newborn child is usually given the family name of the father. However, there are different regulations from region to region about the passing on of names to the child.

Many beautiful girls’ first names from the Arab countries can be traced back to the Islamic faith. Are common Arabic girl names represented within the family for many years and passed on from generation to generation.

Beautiful girl names in the Arab world are, for example:

Your suggestions and ideas for Arabic girls’ first names from the comments:

Do you know any other Arabic girl names? Be sure to write me a comment about which female first name is still missing from the list!

If you want more names, you will find an overview of the most beautiful girls’ names here. 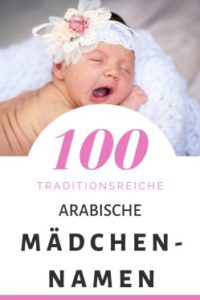 Whats a good name for a demon?

Whats a good name for a demon?