US American girl names combine the multicultural influences of different ethnic groups. In addition to European influences, the Afro-American and Indian cultures significantly shape the First names for girls in the United States, whereby the Afro-American culture with its characteristic name formation deliberately differentiates itself from the European currents.

When choosing a name, Americans are often inspired by timeless film classics. Thus, for example, the nickname counts Scarlett, which goes back to the protagonist Scarlett O’Hara in the film “Gone with the Wind”, has for decades been one of the objectively most popular female names for children in the United States of America.

The name comes from Latin and is a modification of the term “Scarlatum”, which is a synonym for scarlet material.

Adapted to the Anglo-American language, the expression “Scarlatum” can also be understood as “the redhead”.

The reverence for the natural beauty of nature and the respect for actors and artists directly influence the naming process in the American states.

The Spanish language offers a wide repertoire of beautiful first names, which, thanks to the influence of Spanish immigrants, is becoming increasingly important in the American name division. Spanish girls’ names regularly fill up like the first name Luna, which translated from the Spanish “moon” or “moonlight” means, one of the top positions in the US American name ranking.

The relatively most popular first name for girls in the USA was the nickname in the 2018 calendar year Olivia, which translated from Latin means “the olive tree” and is classically reinterpreted as “the peaceful one”. The name first gained fame through William Shakespeare, who created the first name for his play “Was ihr wollt” and who helped the nickname gain collective fame in the English-speaking world.

Do you know any other American girl names? Be sure to write me a comment about which female first name is still missing from the list! 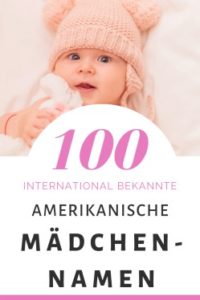 Pregnancy test: when is it safe?

Pregnancy test: when is it safe?