Leon is no longer great: The hit parade of first names in Eastern Switzerland

As in previous years, names like Noah and Liam or Mia and Emma also dominate the first name chart of 2020. A similar picture emerges in Eastern Switzerland – even if there are some surprises. 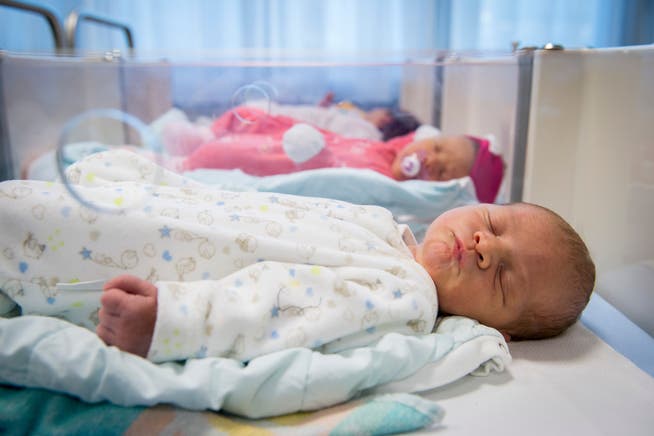 85,914 babies were born in Switzerland in 2020. Now the Federal Statistical Office (FSO) published the new first name hit parade on Tuesday. None of the names in the top ranks are new. Most of the girls who saw the light of day in the past year are called Mia, as they were in 2019. After being number one among boys’ names in 2018, Noah was able to overthrow last year’s leader Liam again from the throne. It is noticeable that a long-term trend is continuing with the most popular baby names in 2020: Today’s parents prefer to name their children succinctly – and with a lot of L’s, A’s and E’s.

These are the most popular first names for newborns in 2020

Among girls, the first name Mia continues to be the undisputed leader with 461 mentions. Emma follows in second place: 407 newborn girls were named that way in 2020. Just like Noah and Liam, Mia and Emma have shared the first two places in the first name hit parade since 2016. The name Mila landed on the podium last year (350 mentions).

The picture is the same in Eastern Switzerland as it is in Switzerland as a whole: Most parents name their newborn child Mia or Noah. In St.Gallen, Leon (28 times) loses last year’s top position and even slips to third behind Elias (31 times). The name Emilia, which just misses the podium on the Swiss ranking list, is only missing three entries in the canton of St.Gallen to outdo Mia (32 times), in the canton of Thurgau it is even enough for first place. 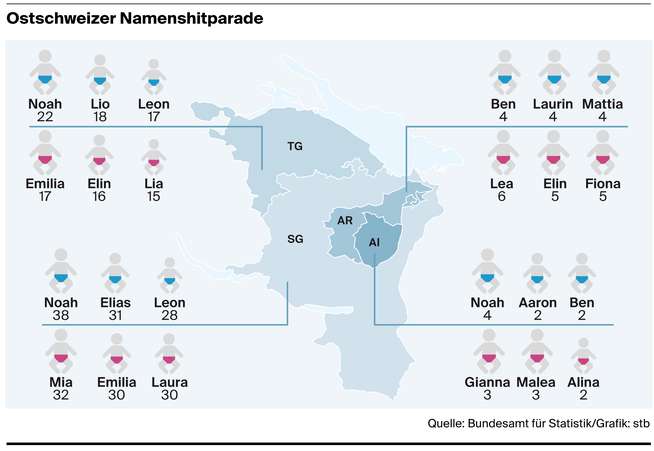 The name Emilia is not the only surprise in the Eastern Swiss first name hit parade. The boy’s name Lio, which is only in 14th place in Switzerland, is fifth in the canton of St.Gallen and even second in the canton of Thurgau. In Thurgau he only has to admit defeat by Noah. In the canton of Appenzell Ausserrhoden, too, Noah is in first place among boys, but given the low birth rate, four entries are enough for him. For Gianna and Malea, only three entries are enough for the shared first place in the girls’ table. In Appenzell Innerrhoden, the names Ben, Laurin, Mattia, Nico and Silas share the top position of boys with four entries each, while Lea heads the list of girls’ names.

And one more thing: The name Jolanda is now neither in the country table nor in the rankings of the cantons of eastern Switzerland. Will this change next year after the sensational Olympic victory of St. Gallen mountain biker Jolanda Neff?

Thanks for visiting we hope our article First name chart: the most popular baby names in Eastern Switzerland
, don’t forget to share the article on Facebook, twitter and whatsapp with the hashtags ☑️ #chart #popular #baby #names #Eastern #Switzerland ☑️!