You are a fan Old German boy name and would you like to have an overview of which names were used in the past? Are you still not sure about the name of your son and still want to be inspired for a beautiful male name? Older, traditional first names for boys are enjoying increasing popularity and come across us more and more frequently in everyday life. “Old” or not, so many Old German first name still cuts a fine figure today to be considered as a first or accompanying name.

Why are old German boy names so popular?

There are hardly any limits to creativity in naming today. Globalization is reflected in first names and modern, cool boy names from the English-speaking world pushed classic first names for boys off the hit list for a while. Suddenly one was no longer called Thomas or Karl, but Tom or Charlie.

In recent years, the opposite trend has been observed: In Germany, Old German first names on the rise and give the newborn an aura of tradition and strength. This is also because some of the names from abroad had to experience a kind of stigmatization. “Kevin”, for example, became so popular with a certain class of society that the ironic term “Kevinism” was derived from it. This means that a first name that sounds unusual and foreign conveys a social stigma. This means that men with the first name Kevin have worse chances of applying, promoting or granting a loan for this reason alone. The person responsible reads the first name and prejudices and clichés are inevitably activated in his head.

Old German boy names did not experience such stigmatization.

Lots Old German boy names are filled with heroic stories. There are specific role models to be emulated. Whether historical personalities or literary figures, first names for boys from a specific context provide the opportunity to analyze the role model and develop pride in your first name.

To the old German name include those of German origin as well as boy names with Hebrew roots or male first names of Greek origin that were popular in Germany a few decades ago.

A nice example is the name Friedrich, which is a combination of the Old High German words powerful and peace contains. Thanks to today’s parents’ awareness of tradition, first names with a strong meaning are on the rise again.

A well-known example is the name Hans. Its popularity over the last few decades developed as follows:

Can old German boy names be given without further ado?

The German naming law roughly outlines the subject. At least a first and last name are required to properly identify the person. The parents present the name to the registry office no later than four weeks after the birth.

If the registry office refuses to register a name, the officials are of the opinion that the child’s wellbeing is in danger or the name is that cannot be clearly assigned to the gender.

A first name in Germany is not permitted if it is a ridiculous expression or a place and brand name. Old German male first names are certainly accepted. They stand for tradition and history and are already well known.

For those who are curious about looking for a name, I have one here Top list for old German boy names that I am happy to make available to you here. Have fun browsing!

Your suggestions for names from the comments

Do you know any other old German boy names? Be sure to write me a comment, which male first name is still missing from the list? 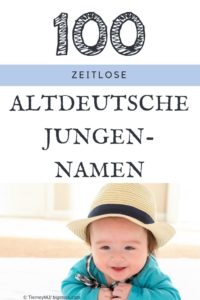